[I’m reviving my Blogs That Deserve a Bigger Audience (DABA) feature. If there is a blog that you think should be featured here, drop me a note.]

Today the Crimson Megaphone goes to Andrew Watt. Andrew is a history teacher at a small private boarding school in northeast Connecticut. He also is a level 1 USFA-certified foil coach, a NOLS-trained outdoor educator, and Chair of the Commission on Professional Development for the Connecticut Association of Independent Schools. I’ve been reading Andrew for a long time. His blog definitely deserves a bigger audience.

Oh, and we are alone

And all the way down.

as my friend pointed out, those things that I’ll accept and those that I won’t allow make me a vested interest.  I’ll fight tooth, nail, and claw to keep certain rights, push back against others, and expect radical change – as long as it does not really inconvenience me, wreck my tenure, or my pension, or damage my seniority.

That makes me a vested interest.

There is a strong desire to re-make American education from the top down, and the laws and grand grant programs of the last decade seem uniquely suited to carrying out that vision.  The “little people” who stand in the way of that vision are going to be rudely pushed aside for a little while as those forces push for the logical conclusions of the programs.

But the other side of the coin is the real problem.  We aren’t about to get some new educational plan out of all of this.  There isn’t going to be some new tech-based teaching style and there isn’t going to be a massive shift to a new, progressive creativity-based approach in the classroom, with a lot of innovation in the classroom, and a lot of effort to institute change.

It’s not enough to teach kids how to use the web.  We also have to teach them how to use books, as well.  We have to teach students how navigate between multiple sources of information – some digital, some paper; some secondary, some primary, some tertiary; some books, some magazines, some weblogs.  We have to teach them to express themselves in multiple modalities: giving up authorship control on wikis, claiming opinions for themselves on blogs, arguing formally in papers, chatting informally in podcasts, reporting impartially in newspapers, creating beauty in graphical displays; and standing up to present what they know in a way that showcases confidence, intelligence and poise.

And that means that I have to think of each student as enmeshed in a Three-Fold Web.

I also asked Andrew to participate in 5 Questions…

1. Besides your own blog and Dangerously Irrelevant, what are 3 blogs that you’d recommend to a school administrator that’s new to the education blogosphere? 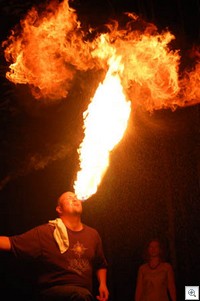 I think the big thing that I see is that the teaching profession is starting to be "in-flux" in the same way that the recording industry started being in flux ten years ago, and the newspaper business started to be in flux three years ago.  I meet teachers all the time now – both at my school and at conferences and in transit between other things – who are losing their jobs, or having to shift schools because their old school is undergoing re-assignment (magnet school to STEM school, STEM to magnet, public to charter etc).  I don’t think schools are going to look like they do now in as little as five years, and the stuff that I see coming out of Clay Shirky, Dangerously Irrelevant, Seth Godin, Weblogg-ed, Moving at the Speed of Creativity, TeachPaperless, and The Tempered Radical suggest that teachers need to start thinking of ourselves as entities that may be teaching in five years, but disaggregated – that means fired – from traditional school environments.

3. What does ’21st century teaching / learning / schooling’ mean to you?

Increasingly, I think there’s a divide between those three things — teaching, learning and schooling.  Teaching is what I do in the classroom, which is to try to impart an information-set to a group of students.  Learning is what I and my students do together, in a digital environment.  And schooling is all the rest of conveying social norms — don’t fight in school, don’t grab a girl’s private bits, this is how you play lacrosse, this is how you set a classroom or conference room in order at the end of the school day, and so on.  I do a lot more schooling than I’d really like.  I do think that the students who come to me are arriving less-prepared every year.  I used to be able to assume some knowledge of ancient Greek myths in my classes, and an understanding of writing basics, and some literary exposure.  It’s proving less true, and I do think that 21st century learning has to cater to an audience more influenced by movies and games and television than books and newspapers.

4. What is a special learning experience you had when you were in elementary or secondary school? What made it special and memorable?

My mother recalls that when I was in second grade, she was called to a special meeting.  A teacher had given a quiz on the federal government, and many students had done very poorly. There was outrage and anger, because the teacher had given the quiz without providing any information ahead of time.  The meeting was an opportunity for the teacher to explain that it was a pre-test, to find out what students already knew.  A woman sitting next to my mother leaned over and said, "only one little boy knew all the answers.  Your son.  Why is that?" And my mother, startled and slightly unnerved, said that her uncle worked in Washington DC, and had hosted me for a long weekend as a visitor and guest, and had taken me to the Smithsonian and the White House and the Capitol.  I remember the trip, and the places, but not the quiz, of course. On another occasion, when I was in fifth grade, I was recommended to a special science program, and I and another boy from my class got to spend a weekend at a mountain-top astronomical observatory run by the state department of education.  We stayed up all night to watch the stars, learn the constellations and see the planets, and observe the moon through a telescope.  In a dark basement room, we got to watch one of the first lasers available to students shine its red light through a cloud of chalk dust.  A lot of my best educational memories are along those lines – unusual places and events in locations far distant from home, where experts taught me something new that I might need for the life that was ahead.

5. What impacts do you think ubiquitous wireless broadband Internet access would have on us?

I think that I’m already carrying the Library of Alexandria around in my pocket thanks to an iPhone and an iPad.  Even without internet access on it, I carry around about 600 books in Stanza, Kindle software, and iBooks.  If I had an SD chip reader that worked with either device, I’d carry around 5000 or so, just to demonstrate the power of this kind of device: an entire school library in the space-equivalent of a 3-ring binder!  This kind of always-on firehose of information is seductive to students. I spend far more time policing Appropriate Use issues than I’d like, even in a class where they’re discussed regularly and openly.  Yesterday a kid was watching a replay of a baseball game, two others were playing a game, and two more were "wandering vaguely", to use A.A. Milne’s prescient description of web-surfing.  This is a class of seven kids! I think lecture-based learning is dead, unless we start including meditation and focus and willpower exercises in grades as low as 1.

Thanks, Andrew, for all that you do!