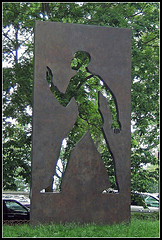 I use the Rapportive plugin for Gmail. It’s a pretty powerful little add-on that gives me enhanced profile information for the people that send me e-mail by tapping into Facebook, Twitter, LinkedIn, Skype, Flickr, my Google contacts, and more. For example, if you used Rapportive, here’s what you’d see on the right side of your screen if I e-mailed you.

You can see from my profile that I am richly connected and using a variety of social media tools. There are many ways to intersect with me, professionally and/or personally.

Although it’s happening less frequently every day, I still receive a great number of e-mails from people whose Rapportive profile looks like this: 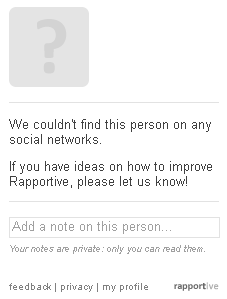 This doesn’t mean that they lack a Rapportive profile. It means that they have no presence on any social networks. No Facebook, no Twitter, no LinkedIn, no Flickr, no etc. Nothing.

I wonder about these people. They’re not just missing out. They’re missing out. In a world that’s hyperconnected and hypernetworked, these people are off the grid. Whatever ideas they have, whatever service they’re offering, whatever charity for which they’re trying to raise money, whatever product they’re selling – whatever they’re doing is invisible to anyone outside their local geography.

In 2011, it seems to me that these people are largely irrelevant to anyone other than their local community. And though it might be fine for many to make that individual choice, that decision should stem from intention rather than ignorance. I also believe that we should be doing better by our schoolchildren. They may decide to go off the grid when they’re older, but in the meantime we should be doing our damnedest as educators to teach them how to be networked and connected in positive, productive ways because in the future almost all of them will want their products or services or charities or ideas to have some traction.

If this were a review, I’d give Rapportive 4 highlighters for being a solid bit of software that does what it intends quite well.

But I’d give the person above 0 highlighters because I don’t know about her. And neither do you.