The nuts and bolts of online debating [guest post]

THIMUN Online Model United Nations evolved around (mostly) free and open source technology tools and today revolves around three, interrelated parts: our website, our Blackboard Collaborate suite of conference rooms, and our social media network. Each of these pieces plays a part in creating an online community that is both student-centered and capable of delivering information in a timely fashion. Much of O-MUN’s development has been experimenting with this combination of pieces, finding ways to make them work seamlessly with each other, and searching for other options when they have not.

Website: Our current website feels a little bit like a driving a Ferrari – way too powerful a machine for someone who just got a driver’s license. Our website is run off a Drupal platform: not exactly user-friendly, but full of possibility. We burned through our wiki and our WordPress site in a matter of months. As we grew and attempted to add more functionality to our website (something we felt was important because we didn’t want the program driven entirely off Facebook), these two options filled a need but quickly became too limiting.  Currently we run our blogs and debate registrations off our new home, and we hope to include messaging, forums, and additional program websites in the future. Students and MUN Directors are encouraged to register on the site and, once approved, may then sign in, click on a debate event, and register to debate. Goodbye Google Surveys, a system we outgrew and that was becoming far too cumbersome for our needs.

Blackboard (Bb) Collaborate Conference Rooms: O-MUN’s first conference room was a 50-seat room that we won in a Learn Central  competition. The following year we were generously provided a room by The Hague International Model United Nation’s office in Qatar (THIMUN Q). When we needed more than one room, they updgraded our license. O-MUN now has 18 rooms, with various parts of the program each having their own specialized room (jrO-MUN, ICJ, Security Council, Asia, France, etc.) This is the only significant piece of kit that we pay for. We have not found suitable alternatives but Blackboard’s pricing structure is madly frustrating and does not adequately address the needs of small, non-profit with inconsistent first-time user numbers. Customer support also can be a bit dicey, particularly if you are not a large institutional customer. Having said that, it offers everything we need and the students find it easy to use!

Students log into the Bb conference room as their country using the following protocol +China (name). This allows participants to be placed in alphabetical order. Guests log in as ‘guest’ and sink to the bottom. Moderators/Chairs log in with their name (position), with the exception of Amendments. An amendment student logs in as “amendments.’ When a delegate wants to submit a proposed change to the resolution being debated, she sends it via private message to this moderator. We only use the audio feature in Bb since 30-60 students with multiple bandwidth issues would make video streaming too difficult. You can hear an example of a debate and what it sounds like. 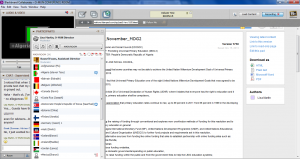 Behind the scenes a WHOLE LOT OF ACTION is happening. Students, upon initiation into this moderating world, describe it as a ‘rush,’ ‘wild,’ ‘hairy,’ a ‘multi-tasker’s nirvana.’ All moderators (and it takes a minimum of five to run a debate) are logged into a Skype group for backchannel communication. The tally moderator and the chair are logged into a shared Google doc to track every speech and question and update that in real time. The amendment’s moderator (the most challenging moderating position) is fielding private chats (amendments), copying those into a separate Skype group so that these can be reviewed with the chair, and operating a TitanPad (similar to Google docs) that is pulled into the Bb room via a web tour.  The Chair and Co-Chair calmly officiate over the debate but behind the scenes the tally mod is tracking participation, the chat mods are reviewing ALL private communications to check for suitability and appropriateness, and the amendments moderator is working the Titan Pad. ALL of them are on Skype, messaging hints, calling for assistance, offering encouragement. One or two university students – and usually myself – are present to oversee all of this but it is, for the most part, a student-run show.

And the best part? These students are usually on separate continents. It is very common to have a chair and co-chair from the USA and United Arab Emirates, chat mods from Taiwan and Jordan, an Amendments mod from Nigeria, and a tally mod from Lebanon or Tanzania. Throw in an Assistant Director from Somalia or Hong Kong and you’ll see just how crazily amazing this gets.  In a recent debate, we had participants from over 30 countries log in synchronously for a 90-minute debate on reaching the United Nations’ Millennium Development Goal on universal primary education.

Social Media: It all started with Facebook but we do engage with some of our delegates via Twitter, using #omun and @onlinemun to communicate. Students recently set up a Tumblr account to engage in some of the sillier outreach we like to do: photo competitions, videos, and the like. Online Model United Nations has a LinkedIn Business page as well. But it really has been about Facebook. We have regional groups, moderating groups, leadership groups, working groups, and travel team groups. It’s a lot of Facebook but it is where students are. I now use social media like many of my students – friending and unfriending students to form alliances, to get information, and to network. Since email has become oh-so-20th-century to many of these millennials, I am more apt to communicate with them via private messaging than any other form of communication. In the evening here in the Middle East, my computer and iPad ping and squawk for hours as the messaging occurs in a steady stream. 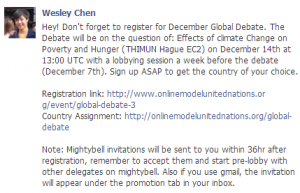 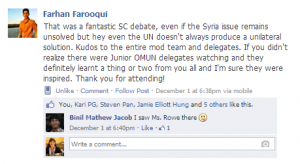 So that’s our world, developed fully-online by students from around the globe. But technology is just part of the equation here and, in my opinion, the smallest part of a larger story. The next several blog posts will give you a glimpse into the transformative nature of this program. I hope you’ll enjoy hearing from the students who have worked so hard to build THIMUN Online Model United Nations.