Today is the third day of Chart Week here at Dangerously Irrelevant.
Yesterday’s post on student
laptops and wireless classrooms discussed how many public schools lend
laptops to students and the extent of wireless penetration in classrooms.
Today’s post extends those data to show the length of time that students get to
use the laptops that are loaned out to them. All data are from the
recently-released NCES report, Internet Access
in U.S. Public Schools and Classrooms: 1994-2005.

Maximum length of time of laptop loan to
students

NCES asked those public schools that said they loaned laptops to students what was the
maximum length of time of those loans. In other words, how long did students
have use of the laptops they received? Here is the chart: 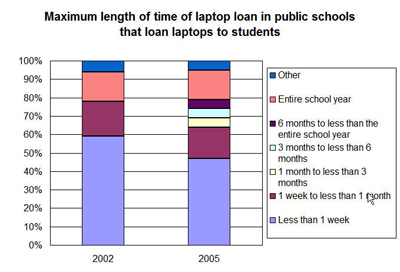 As the data show, nearly half of the schools that said they loaned laptops to
students did so for less than a week. Only about a sixth of the schools surveyed
in 2005 said that they gave students laptops for the entire school year; this
proportion is unchanged from 2002. When combined with yesterday’s
data, which show that only about 10% of schools even loan laptops to
students in the first place, we can see that few students in our country are
receiving the opportunity to work with laptop computers, even for only a few days at a time. One probable explanatory factor regarding low laptop lending by
schools (and thus low laptop usage by students) is that most
public school classrooms lack wireless Internet access.