Today is the second day of Chart Week here at Dangerously Irrelevant. Yesterday’s topic, Internet access in public schools and public school classrooms, may not have been very exciting for many of you, but I needed to create some context. I am guessing that today’s topic, student laptops and wireless classrooms, may be more interesting to most folks. All data are from the recently-released NCES report, Internet Access in U.S. Public Schools and Classrooms: 1994-2005.

As the chart below shows, about 10% of public schools reported that they lent laptops to students in 2005, about the same number as in 2002. In 2005, secondary schools (18%) were more than twice as likely to say that they lent students laptops than elementary schools (7%); these numbers also are the same as in 2002. In 2005, 15% of the schools with less than 6% minority enrollment said that they were lending laptops to students, while in schools with 50% minority enrollment or higher, only 7% said that they were lending students laptops. 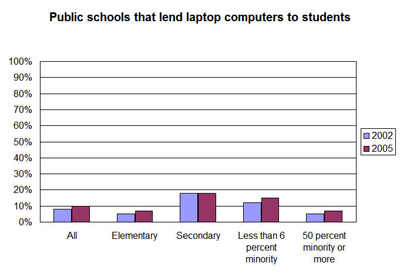 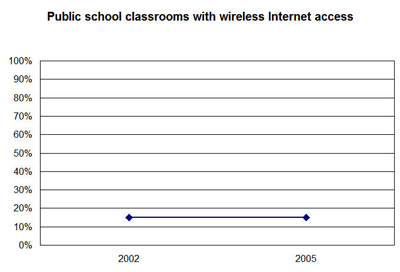