As you’ve read the posts about the team, seen the pictures and watched the videos…I’m positive you’re wondering what actually happened while we were there. Am I right?!

Lets just take it day by day, shall we?

Day 1: So, Day 1 was on a Wednesday. The team had to be at the school by 4:30 and we left at 5 (in the morning, yes). We stopped every two/two and a half hours. It was a very long car ride, least to say. We got there about 11 am. So we had an hour to blow some steam before the FTC would allow us to come in. It was meant to be a socialization time, but I myself had noticed that not a lot of people were doing that. I took advantage of the time I had. I grabbed Logan, Ben, and others who wanted to come and we went all the way down and back up the very long line of teams. We met people from Chile, Mexico, China, South Korea, and a lot of people from almost every state in the U.S! It was pretty amazing, and a lot of teams were really nice. After they let us in we had an hour and a half before judging. During that time we set up our pit area, became familiar with the dome, and updated family members/took pictures. At 1:15 we headed over to judging where we had to wait I’d say a good 10 minutes. Judging this time around was much different than in the past. Usually judging is set up that the team walks into a room, only those judges are there, the door closes and there is silence until you/your team mates start talking. This time we were in a very large room with multiple teams and a lot of judges. The team went in and so did Mr. Dixon. After judging, there was hardware/software inspection on the robot. The rest of us did scouting, looking at other teams, and sitting in the pit area.

Day 2: Thursday. On Thursday the actual qualifying matches happened. Logan, Kazuki, and Collin were constantly back and forth between the pits and the arena. Ben went a long with them because he was media. I (Molly) was at the pit area throughout the whole day. A lot of people stopped by, talked, asked questions and signed our guest book. We offered them stickers, business cards, and candy. It was a lot of fun and interesting to see the different cultures, costumes, and others come by! Kodi was the mascot so she was always at the pits passing those things out. Adam, Cory, Nick and Jeremy were walking around/sitting with me, etc. It was a lot of fun that day, but really long. That night we went back to the hotel and did laundry/watched movies.

Day 3: Friday. On Friday, qualifying matches were coming to a close. We ended with 5 wins and 4 loses. That night we all went back to the hotel room and ordered chinese! It was a pretty boring day at the arena, but the hotel was pretty fun that night.

Day 4: Last day. That day we went and watched other teams, helped support them, watched some of the FRC and FLL games and just kind of took it easy. It was a really relaxed, easy going day. 🙂 That night was so awesome though! We had been told previously that the FTC was going to throw a big after party. None of us thought that it was going to be that cool though. This year it was circus themed. They used up basically everywhere we had been in the dome, so it was a huge party. There was a rock climb, a couple of those bouncy house race things, games, laser tag, dancers, people who were on stilts, roller blades, and bikes, there was a photo booth, a black out room, air hockey, ALL the food and drinks were free and you could win prizes depending on what games you play! It was so much fun. 🙂 Everyone was running around, dancing, getting glow sticks, playing games, eating the food. Mr. Dixon said that he went and watched these guys who were professional jumpers! It was amazing! 😀 Will.I.Am made a speech, and Montell Williams went to the World Championships too! It was so much fun. 😀 The First program is an amazing one, that teaches kids team work, socialization skills, and how to have fun while learning. The reward that myself and my team got for all their hard work was amazing. Everything had payed off and all sacrifices that we made was totally and utterly worth it.

I’m so glad I got to share this experience with you- the reader. If you have children, grandchildren, nephews, nieces, anything… I strongly suggest that you find a First program somewhere near you and get them involved! So many people were at this event, it was crazy! This is one of the most amazing, mind blowing things. It teaches so much more than just knowing the math or science of what’s going on. It’s beyond anything else that I believe is currently offered to kids/young adults in the world today. 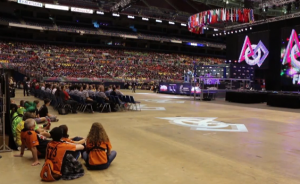