My first contact with Online Model United Nations (O-MUN) was in my sophomore year of high school. At the time, I approached the program with some degree of caution; after all, although I had done a substantial amount of Model United Nations (MUN), I had never heard of its existence online. MUN was supposed to be in real time, face-to-face, wasn’t it? How was an online MUN program even possible, let alone practical?

The extensive MUN program at my school had already served me well. By the end of my sophomore year, I had done MUN in three continents and I wanted more. However, clear barriers existed which prevented me from acquiring more experience. After all, traveling expenses, geographical distance, restrictions on face-to-face meetings, and time off school ultimately set a conference limit and a school only has so many human resources. 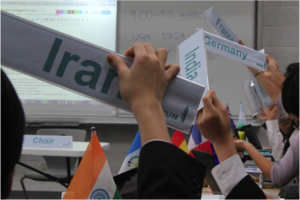 The Online MUN debate platform is a Blackboard Collaborate room, where traditional elements of a f2f conference are replicated online – for example, delegates raising their placards to indicate they are ready to take the floor. O-MUN student leaders run monthly Tech Check sessions for new delegates and students quickly adjust to the debate room environment.

My first online conference, however, was the game-changer. With the friendly accents of delegates from over four continents, with the sheer intensity of debate over the South China Sea archipelagos, with the voices of students my age hungry to make a positive difference, a feeling of belonging stirred within me. I felt connected to a group of people who, like me, were filled with raw idealism in hoping to help others. I was empowered – I could now influence and be influenced by change-makers from over fifty countries.

With Online MUN I can debate multiple times every month, and with far greater authenticity due to the international nature of the program. It is not uncommon to be in a committee with delegates from three continents, some of whom are directly tied to the conflict in question. In my opinion, it is this democratization of a more authentic MUN experience that separates the MUN of today from the MUN of tomorrow.

The middle school delegates of jrO-MUN (Junior Online MUN), many of them new to MUN, are particularly appreciative of the way this online simulation is democratizing the MUN experience. They recognize that jrO-MUN brings an authentic experience of international diplomacy to their fingertips. They see that jrO-MUN is giving them a voice. Middle School delegates who are fully capable and passionate about debating are often denied early MUN access due to resources. They may have to wait their turn while older students take up travel team positions and have their overseas adventures, but junior delegates no longer have to wait for a genuinely globe-spanning MUN debate. 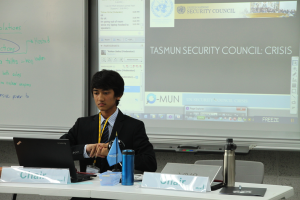 Over the past year, as jrO-MUN Secretary General, I have had the opportunity to lead and learn from students all around the world; from my laptop at home in Taiwan to the lecture halls of Georgetown University in Qatar and the assembly halls of The Hague in the Netherlands. More than ever before, I realize the power of exposure – early exposure – to different voices with shared passions. O-MUN sets the stage for this chorus.

Rohan Sinha serves as the Global Secretary General of Junior Online MUN (jrO-MUN), the middle school partner program to O-MUN. Currently a high school junior at Taipei American School, Rohan started MUN in seventh grade and since then has debated in conferences in Taipei, Berlin, New York, and Qatar. He also founded and leads his school’s International Genetically Engineered Machine (iGEM) team, after having won the Gold Medal at the college iGEM competition at MIT with the NYMU Taipei team.