We can’t make America great again, or Europe only white by trying to recreate the world of the past. The era of well paying industrial jobs with amazing benefits and pensions is over. The problem America and other industrial nations are facing is the girth of their populations who are not just ill equipped but not at all equipped to compete in the Modern Learning world. In a sense I suspect we are in for some difficult times because the folks who are being disenfranchised by the changes we are experiencing need for someone to blame. They can’t blame themselves and their inability to adapt and re-learn, so it must be the fault of the immigrants. What they may need to start to grapple with is countries like India, China, Singapore etc. already realize they need to change.

If educators are still unconvinced moving to a Modern Learning environment is a moral imperative, I hope they are beginning to come around. We cannot continue to educate students in classrooms designed for a world that no longer exists. The unrest we are beginning to see is a testament to the change we are facing and we have a professional obligation to ensure our current students are ready to adapt to an ever changing horizon.

Connectivity versus isolation: Which leads to prosperity?

We’re going through a change in the “climate” of globalization — going from an interconnected world to an interdependent one, from a world of walls where you build your wealth by hoarding the most resources to a world of webs where you build your wealth by having the most connections to the flow of ideas, networks, innovators and entrepreneurs. In this interdependent world, connectivity leads to prosperity and isolation leads to poverty. We got rich by being “America Connected” not “America First.”

Finally, we’re going through a change in the “climate” of technology and work. We’re moving into a world where computers and algorithms can analyze (reveal previously hidden patterns); optimize (tell a plane which altitude to fly each mile to get the best fuel efficiency); prophesize (tell you when your elevator will break or what your customer is likely to buy); customize (tailor any product or service for you alone); and digitize and automatize more and more products and services. Any company that doesn’t deploy all six elements will struggle, and this is changing every job and industry.

At the individual level, the single most important adaptation is to become a lifelong learner, so you can constantly add value beyond what machines and algorithms can do.

“When work was predictable and the change rate was relatively constant, preparation for work merely required the codification and transfer of existing knowledge and predetermined skills to create a stable and deployable work force,” explains education consultant Heather McGowan. “Now that the velocity of change has accelerated, due to a combination of exponential growth in technology and globalization, learning can no longer be a set dose of education consumed in the first third of one’s life.” In this age of accelerations, “the new killer skill set is an agile mind-set that values learning over knowing.”

The hidden cost of an achievement-oriented curriculum

As children, we’re trained to avoid failure, not learn from it. It’s presented as a sign of inadequacy, even worthlessness. I think this is the hidden cost of a K-12 curriculum that is achievement-oriented. Failure is never presented to us as a different kind of educational experience, a universal (and ceaseless) part of being human.

Never have so many people had so much access to so much knowledge and yet have been so resistant to learning anything. 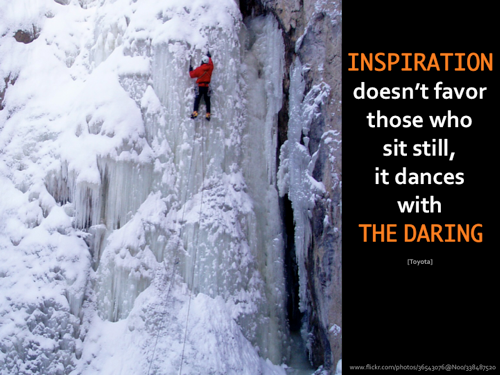 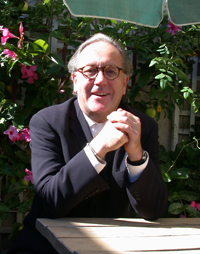 From Using technology to move beyond schools (Elmore & City):

With rare exceptions, schools currently treat the digital revolution as if it never happened. Computers, more often than not, still sit in dedicated rooms, accessible only with adult supervision. Laptops, when they are used at all in classrooms, are frequently employed as electronic worksheets, digital typewriters, and presentation producers, rather than as extensions of students’ access to knowledge. When students do use technology to extend the reach of their learning, they typically do so by visiting predigested information sources and cutting and pasting information into predetermined, teacher-driven formats. “Social networking” among students is treated as a subversive activity engaged in by kids who are up to no good, and certainly not as a promising point of entry to anything that might be called “learning.”

When students step out the door of the institution called school today, they step into a learning environment that is organized in ways radically different from how it once was. It’s a world in which access to knowledge is relatively easy and seamless; in which one is free to follow a line of inquiry wherever it takes one, without the direction and control of someone called a teacher; and, in which, with a little practice, most people can quickly build a network of learners around just about any body of knowledge and interests, unconstrained by the limits of geography, institutions, and time zones. If you were a healthy, self-actualizing young person, in which of these environments would you choose to spend most of your time?

The basic problem with this scenario, however, is this: The more accessible learning becomes through unmediated relationships and broad-based social networks, the less clear it is why schools, and the people who work in them, should have such a large claim on the lives of children and young adults, and the more the noneducational functions of schooling come to the fore.

From What would happen if we let them go? (Elmore):

what would happen if we simply opened the doors and let the students go; if we let them walk out of the dim light of the overhead projector into the sunlight; if we let them decide how, or whether, to engage this monolith? Would it be so terrible? Could it be worse than what they are currently experiencing? Would adults look at young people differently if they had to confront their children on the street, rather than locking them away in institutions? Would it force us to say more explicitly what a humane and healthy learning environment might look like? Should discussions of the future of school reform be less about the pet ideas of professional reformers and more about what we’re doing to young people in the institution called school?

For those of you who don’t know Dr. Elmore, he’s the Gregory R. Anrig Professor of Educational Leadership at Harvard University. As you might imagine, he is quite smart and is widely recognized as one of America’s leading thinkers about classroom instruction and school curriculum. If you haven’t read School Reform from the Inside Out or Instructional Rounds in Education, it’s probably time that you did.

Here’s a video that I made in 2007 of an excerpt from one of his speeches. Happy reading (and watching)!

A quote from Erica McWilliam, via Will Richardson’s latest post. 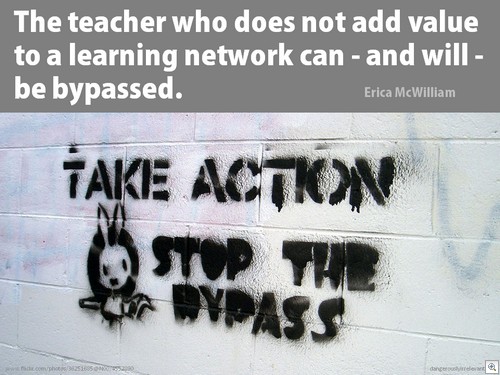 True statement by a teacher (said with all sincerity) in one of my workshops this semester:

We’re so far behind our students. How do we catch up and move past them so that we can then teach them things they don’t know?

Slide – Lose your sleep before your decision, not after it