If you run an education system based on standardization and conformity

Politicians often scratch their heads over [persistent educational] problems. Sometimes, they punish schools for not making the grade. Sometimes, they fund remedial programs to get them back on track. But the problems persist and in many ways they’re getting worse. The reason is that many of these problems are being caused by the system itself.

I think the fact that only 44% of our kids reporting engagement in high school strongly suggests [that school is] “broken.” I think the difference of educational opportunities for the kids in Camden v. the kids at Lawrenceville Prep is “broken.” I think spending an inordinate amount of time on curriculum that will soon be forgotten, curriculum that most kids don’t care about despite our best efforts to make them care, curriculum that then gets assessed in ways that really don’t show if kids can actually apply it and is used to evaluate teachers in a blatantly unfair way… all of that is “broken.”

I suspect that most teachers are nurturing, or at least want to be, and that they already make a meaningful difference in the lives of some small proportion of their students despite the nature of the system.

In 2009 the peer-reviewed journal Educational Psychologist published a literature review article by Professor Johnmarshall Reeve on why the majority of teachers act in ways that thwart the primary psychological need for autonomy.

He suggests that both the system and the individuals in the situations studied reinforce behaviors that are exactly the opposite of nurturing in a variety of ways, not because of back room conspiracies nor venal depravity, but because of tragic misunderstandings.

The deleterious effects of the system overwhelm the positive effects of nurturing individuals because the system is currently organized in a manner that undermines nurturing, the very foundation upon which education is built.

The system is not all-powerful, so it does not always undermine the foundation completely.

Good luck with that 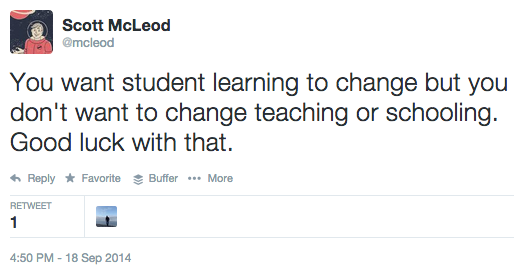 [FYI, doing even more of what you’ve been doing is not the answer]

Fury over the possibility that kids will get off too easy or feel too good about themselves seems to rest on three underlying values.

The first is deprivation: Kids shouldn’t be spared struggle and sacrifice, regardless of the effects. The second value is scarcity: the belief that excellence, by definition, is something that not everyone can attain. No matter how well a group of students performs, only a few should get A’s. Otherwise we’re sanctioning “grade inflation” and mediocrity. To have high standards, there must always be losers.

But it’s the third conviction that really ties everything together: an endorsement of conditionality. Children ought never to receive something desirable – a sum of money, a trophy, a commendation – unless they’ve done enough to merit it. They shouldn’t even be allowed to feel good about themselves without being able to point to tangible accomplishments. In this view, we have a moral obligation to reward the deserving and, equally important, make sure the undeserving go conspicuously unrewarded. Hence the anger over participation trophies. The losers mustn’t receive something that even looks like a reward.

A commitment to conditionality lives at the intersection of economics and theology. It’s where lectures about the law of the marketplace meet sermons about what we must do to earn our way into heaven. Here, almost every human interaction, even among family members, is regarded as a kind of transaction.

Interestingly, no research that I know of has ever shown that unconditionality is harmful in terms of future achievement, psychological health or anything else. In fact, studies generally show exactly the opposite. One of the most destructive ways to raise a child is with “conditional regard.”