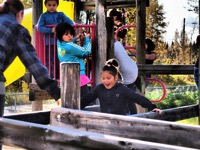 For some reason, we have traded sunshine, wind on our faces, and running for more desk time and tests. Magically, older students no longer need to move and run. That’s what we pretend anyway. We’ve even started pretending that elementary students don’t need recess either, and then we wonder when our kids can’t sit still. Instead of prescribing some time outside in the fresh air, we prescribe pills for hyperactivity.

In Iowa, our Department of Education brags about elementary schools that cut recess

Everyone wants children to be able to read. But unpacking that educational goal – and the political rhetoric that often surrounds it – may require a bit more digging and critical analysis. Here’s an example…

In the 2004-2005 school year, 18 4th graders took the state reading test at Charter Oak-Ute Elementary. Only 14 were deemed proficient, for an AYP percentage of 78%. That apparently sparked a 7-year quest to raise test scores.

Today the Iowa Department of Education (DE) touted Charter Oak-Ute Elementary as one of the 5 schools (out of 1,409 in the state) that’s supposedly proving that poverty does not equal destiny. In fact, DE boldly said on its home page:

It may be well known that high-poverty schools will have lower proficiency rates than their more affluent counterparts. Sure, it’s well known. But it is wrong.*  [yes, that was our Department of Education dismissing decades of peer-reviewed research on student learning outcomes in high-poverty schools]

What did Charter Oak-Ute Elementary do to warrant DE’s publicity? Well, in 2011-2012, 19 of its 21 3rd grade students passed the reading test – for an AYP percentage of 90%** – despite 58% of its students receiving free/reduced price lunch. [for reference, the average statewide reading proficiency for 3rd graders is 76%]

From 14 of 18 students to 19 of 21 students. If Charter Oak-Ute Elementary had kept its reading proficiency percentage steady, only 16 3rd graders would have passed the state reading test last year. So it essentially moved the needle for 3 students. In seven years.***

By now many of you may be wondering, “What did this elementary school do to bump up these 3 kids’ reading scores?” Well, according to its principal:

[Teachers and students] weren’t happy with some of the things we had to drop, such as morning recess time because we really don’t need that.

That’s right. Among other interventions, the school cut recess. For 7- and 8-year-olds.

Never mind statements against cutting recess from the National Association for the Education of Young Children and the American Academy of Pediatrics. Never mind the research that shows how recess breaks maximize children’s cognitive performance or shows recess is important for children’s learning, social development, and health (“no research clearly supports not having recess”) or connects recess to good classroom behavior. Never mind children’s needs for breaks, exercise, and play. Never mind our childhood obesity epidemic, particularly for low-income kids.

And, apparently, never mind DE’s own admonitions for schools to adopt ‘evidence-based practices.’ Whether proposing 3rd grade retention or cutting recess (FYI, for both the research is heavily AGAINST them), DE is beginning to show that is willing to hold up and/or advocate for practices that are anything BUT ‘evidence-based.’

A high-poverty school that gets rid of elementary school recess to feed the always-hungry maw of ever-increasing test score goals should raise concerns for us. Because it’s yet another example of the kinds of dehumanizing microaggressions that happen all too often to children who are in poverty and/or of color. And it’s not what we in Iowa should be encouraging. Because if DE is willing to tout this recess-cutting school as doing what it needed to raise reading scores, the writing is potentially on the wall for ‘whole child’-oriented practices in larger school districts that have even greater concentrations of children in poverty. Yes, that means you, Des Moines, Waterloo, Sioux City, and Davenport (and others)…

I’m concerned that we’re becoming one of THOSE states. In Iowa we always have prided ourselves as being more enlightened than many of those states in which districts were cutting art, music, recess, physical education, foreign language, and other aspects of school necessary to provide well-rounded schooling experiences for children. We took pride in doing our best to attend to the needs of the whole child – for every child. But that commitment to children – and our recognition of decades of child development research – appears to be waning.

So put February 25, 2013 down on your calendar as the day when not only did Iowans learn that one of our own schools cut recess to improve test scores but also that our own Department of Education was willing to brag about it. Welcome to the new #edreform in Iowa.

* At least it’s ‘wrong’ for the 5 schools out of 1,409 that DE cherry-picked [please ignore the other 1,404]
** DE said it was 92%?
*** Of course this ignores ordinary year-to-year variation, differences between cohorts of students, random measurement error, etc.