by Scott McLeod | Sep 16, 2020 | Leadership and Vision, Learning and Teaching

Fifteen years ago you let a pigtailed 2nd grader walk down the hall and take 5th grade math.

We came to you as the principal of our elementary school in Minnesota and said, “She’s ready for something more.” You smiled at us, looked at the data, and said, “We’ll find a way to make it work.” And then you and your teachers did exactly that.

It didn’t matter that she had to miss time in other subjects; she made it up. It didn’t matter that she was a tiny sprite compared to those bigger kids. All that mattered was that she adored math and could keep up. Every day when it was math time for the fifth graders, she walked down the hall and joined them. She loved it so much. She had a math-themed birthday party that year!

The next year we did the same, but with sixth grade math. And then we moved.

Our new school district in Iowa didn’t quite know what to do with her. But inspired by what you had made possible, every year – somehow – we found a way to make it work. One year in elementary school the best we could do was a self-paced, ‘teach yourself’ model with occasional check-ins with the Gifted and Talented teacher. One year in middle school she had to take a boring, non-interactive online course. In high school she sometimes had to hop on a city bus (or two) to go take math classes at the local university. But she did it. She stayed three years ahead all the way through…

Fifteen years later I am proud to say that pigtailed 2nd grader graduated this past spring with a B.S./M.S. in Civil Engineering from Case Western. She was an officer in the Women in Science and Engineering Roundtable student group. She helped the university steel bridge team go to nationals for the first time. And two months ago she entered the world of work as a happy bridge designer in New York (and, yes, we miss her tremendously).

Linda, a decade and a half ago you were willing to think outside the box. You didn’t throw up unnecessary roadblocks. You didn’t force our kid to fit the system. You just found a way to take our 2nd grader where she was and move her forward instead of letting her stagnate in some arbitrary ‘grade level.’ Collectively you and your teachers just made it work. With a smile. And it made a huge difference for her.

We need more principals like you. We need more schools like yours. We need more pathways that personalize students’ learning and empower them for future life success. Every child deserves the opportunities that our pigtailed daughter had. Thank you for leading as school administrators should, not just for our 2nd grader but for all of the other students that walked your halls as well. We will be forever grateful.

Image credit: The art of math or the math of art, Alan Levine

The chasm between math research and classroom practice 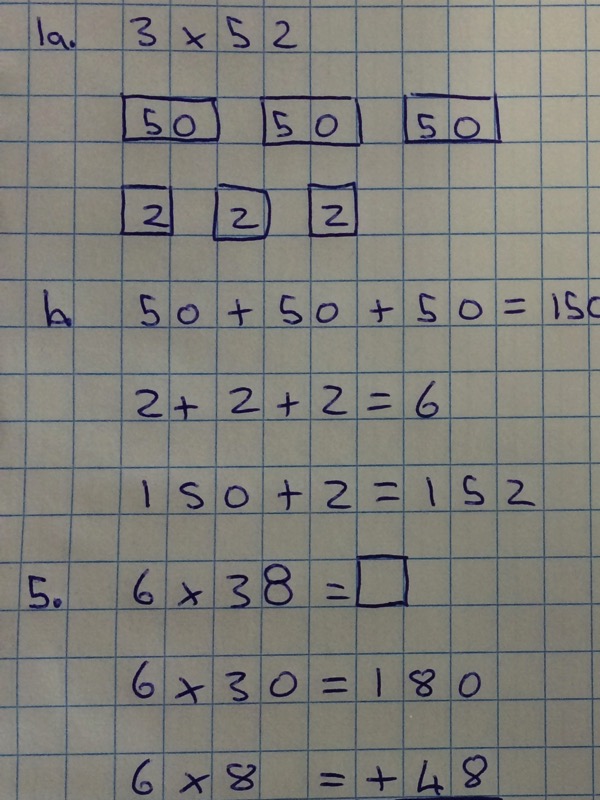 In mathematics instruction, a chasm exists between research and practice. For evidence of this gap, look no further than the mismatch between what research says about developing students’ conceptual mathematics understanding and what we actually do. An example is the way we teach math content in elementary and middle schools. A growing body of promising research shows that if initial instruction focuses exclusively on procedural skills, then students may have difficulty developing an understanding of math concepts.

On post-tests, the students who received only meaningful, or relational, instruction performed better in applying the procedure and solving the equations. In contrast, the students who first received procedural instruction on how to solve an equation tended to resist new ideas and appeared to apply procedures without understanding. [emphasis added]

the form of instruction humorously but accurately characterized as yours is not to reason why, just invert and multiply may not enhance the performance of many students. Alternatively, instruction that places a premium from the start on meaning and conceptual understanding may improve classroom productivity.

And yet, despite Common Core and other efforts, our procedural emphases still persist in many, many math classrooms. And parents clamor for them.

The majority of [learning] games fail because they attempt to teach skills rather than thinking. They focus on retention rather than understanding. They miss the whole reason we should be excited about game-based learning in the first place: because it offers the potential to change the common way we approach teaching and learning. Games can help students improve their critical thinking and problem-solving capabilities while offering clear assessment data that could eliminate our dependency on regurgitation and memorization-based evaluations.

The U.S. has more memorizers

The U.S. has more memorizers than most other countries in the world.

Why meaningful math problems are defined out of online assessments

at this moment in history, computers are not a natural working medium for mathematics.

For instance: think of a fraction in your head.

Say it out loud. That’s simple.

Write it on paper. Still simple.

That’s bad, but if you aren’t convinced the difference is important, try to communicate the square root of that fraction. If it were this hard to post a tweet or update your status, Twitter and Facebook would be empty office space on Folsom Street and Page Mill Road.

It gets worse when you ask students to do anything meaningful with fractions. Like: “Explain whether 4/3 or 3/4 is closer to 1, and how you know.”

It’s simple enough to write down an explanation. It’s also simple to speak that explanation out loud so that somebody can assess its meaning. In 2012, it is impossible for a computer to assess that argument at anywhere near the same level of meaning. Those meaningful problems are then defined out of “mathematics.”