I’ve written about Iowa BIG before. What I love about the school is that you can’t tell the 4.0 student from the student who was struggling academically back at his ‘mothership’ high school because at Iowa BIG they’re both doing amazing work. Joziah Grimm shares his story below. Happy viewing! 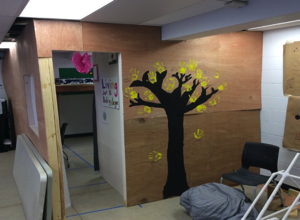 Most schools that dive deep into project-based learning tend to be smaller charter or magnet schools that have the ability to hire new educators and create new schedules and instructional paradigms from scratch. Bettendorf Middle School, in contrast, has been around a while and often resembles other large middle schools across the nation. With over 1,100 students and about 70 instructional staff, a move to a project-based learning paradigm meant shifting legacy structures and mindsets rather than creating from a blank slate. Nonetheless, the school took up the challenge…

Exposed to some faculty from High Tech High a few years back, the school decided to go all in. Most of the staff now have visited the original High Tech High campus in California and the decision was made several years ago to incorporate project-based learning into every Bettendorf Middle School course at least twice a year. Projects at the school range from two to twelve weeks. Teachers put together proposals and then have to pitch their projects to a panel of teacher peers AND students. Together they all use Bettendorf’s project tuning protocol to make the projects meaningful, relevant, and of high quality. All projects incorporate essential curriculum standards to ensure that students are addressing critical learning outcomes. Students hold community exhibitions twice per year to show their learning.

Projects are numerous and varied. For instance, an English teacher had her students investigate the question, What is essential?, which ultimately led to the creation of three separate 9’ x 15’ tiny houses. Students designed, built, and decorated the homes themselves and incorporated essential ELA standards into their work as they wrote and reflected about their attempts to do various tasks within the homes. In another class, students worked with a local senior citizens home to interview residents, write biographies, and create an abstract piece of art that reflected each interviewee’s life. As you can imagine, the unveiling and gifting of these student-created products to the residents was incredibly moving and emotional.

Another project involved creating a community garden. Students worked with a local landscape company to create ten garden plots, write by-laws, create logos, engage in marketing, and build support structures such as a shed. Every garden plot was quickly rented out by the community. Students in another course investigated the question, What is true survival? Although that question initially revolved around outdoor survival techniques, by project’s end student investigations and writing had turned toward such diverse topics as mountaineering, homelessness, food insecurity, and divorce.

Most of this instructional planning, assessment, and standards coverage work is addressed within traditional professional learning communities (PLCs), with some additional assistance from the school’s three instructional coaches. The emphasis is on robust, hands-on and minds-on work and on developing powerful essential questions to frame students’ learning.

Bettendorf Middle School is moving forward in exciting new directions, including a recent global project involving the essential question, Is revolution justified?, that involved 1,000 participating students from nine different schools around the world.

What could you do at YOUR traditional school?

by Scott McLeod | May 17, 2016 | Learning and Teaching, Student Agency and Voice, Uncategorized 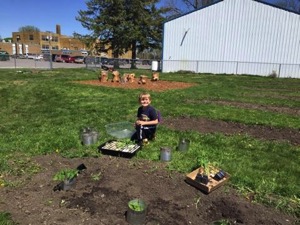 [Want to be the Seed-to-Table Manager here? Read the job description and then email the superintendent.]

Shovels busy at work, three young children dig and cut through the earth, turning over the rich black soil underneath. They have a long planting row to create, but the sun is out and the weather is perfect.

Their female classmate, in her blue-striped jumper and pink flip flops, carefully pats dirt around a seedling. It’s one of many in her grade’s row. Another student will be by shortly to make sure that it’s watered.

Walking tenderly to avoid the young shoots, a boy carries a few small boxes with new plants to be added to the garden. Apparently he’s a bit chillier than his t-shirt-clad peers since he’s wearing long sleeves and a down vest.

Inspired by their teachers’ visit to the Muse School in Los Angeles, elementary students in the Gilmore City-Bradgate School District in Northwest Iowa are diving deep into the seed-to-table movement. The early childhood and daycare kids are in charge of the onions, radishes, spinach, lettuce, peas, and potatoes. Kindergarten has pole beans, bush beans, tomatoes, and peppers. First and second grade has zucchini, cucumbers, carrots, and beets. Third and fourth grade has kohlrabi, eggplant, and some more beans. The fifth and sixth graders do the heavy lifting with corn, cantaloupes, and watermelons. 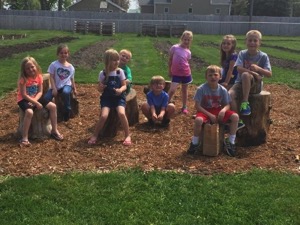 There’s a small shed for tools and equipment. Over on the side is the herb garden, where the students are growing chives, oregano, dill, basil, and cilantro. Old pallets are being re-used to make compost bins. The tree stumps constitute an ‘outdoor classroom’ where students and teachers can sit, talk, and learn together.

The produce will be used both in the school district’s food service program and to help the food insecure in the local community. Families and staff will receive vegetables and herbs as well. And there are plans to get involved in the local farmer’s market…

Achieving science, numeracy, literacy, and other instructional outcomes while being connected to both nature and the community? Awesome.

What could your school do to reconnect students to the natural rhythms of the earth and the people around them? 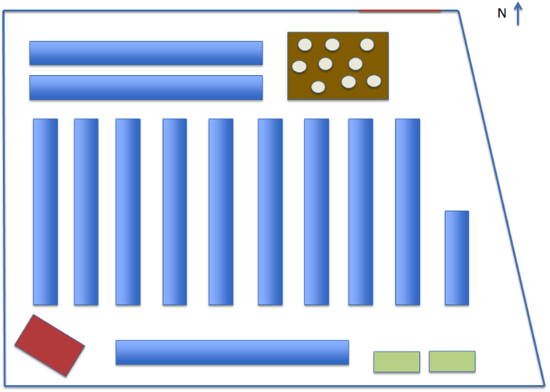 Thanks for a great run, Iowa

Some of you know that I’m headed back to higher education (after a 4-year hiatus to keep a promise to my daughter that she could finish high school here in Ames, Iowa). I will be an Associate Professor of Educational Leadership at the University of Colorado Denver starting in August. We will miss Iowa tremendously but we’re also excited to explore some gorgeous mountains!

I’ve been reflecting on what I’ve done the past 9 years in this state with the very substantial help and partnership of some wonderful colleagues. Here’s a partial list:

That seems like a pretty good run to me… Thanks to everyone who’s been a part of this fun and hopefully-impactful work. Looking forward to my next adventures!

The Iowa Department of Education is soliciting feedback on the state’s literacy standards. Here’s the comment I left:

The Iowa Literacy Standards represent traditional, foundational conceptions of literacy. They do NOT reflect the 21st century literacy standards articulated by NCTE, however. Nor do they reflect digital and online multimedia literacies related to interactive media (see, e.g., the interactive storytelling and virtual reality narratives created by The New York Times), transmedia, augmented or virtual reality, and other evolving mechanisms for presenting information and conveying narratives. In short, the Iowa Literacy Standards do a decent job of articulating old literacies but not what the scholars call ‘new literacies.’ As such, we continue to prepare students for yesterday, not today and tomorrow…

And, no, the separate and thus non-integrated 21st century skills section of the Iowa Core is not enough.