The way we should be thinking about Internet filtering

David Wees says it all… 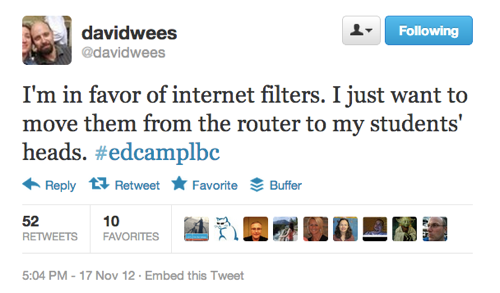 A lot of people found value in my Internet safety talking points for school leaders, including Cory Doctorow, Bruce Schneier, and Tim Cushing. The post now has been tweeted, liked, pinned, and shared over 1,000 times. I shared a PDF version with superintendents earlier this week. But a school IT employee in Eastern Iowa thought it was ‘adversarial’ and ‘hateful.’

I spoke with her yesterday on the phone for about 30 minutes. She was extremely offended by B, spoke vociferously against Google and Facebook (although her school system is not blocking them), couldn’t wrap her head around E or F, thought G and H were untrue (and didn’t want to hear about the research done by danah boyd and the Berkman Center that is behind those statements), and stated that the Bonus was insulting. Needless to say, our conversation didn’t result in a meeting of the minds. I encouraged her to voice her concerns in the comment area so that we all could have a dialogue but she didn’t think that school IT people read my blog and believed that she would not get a fair shake. Her final statement to me was that she was now worried that her school administrator would be breathing down her neck and asking her more questions about the decisions that she’s making. I responded that I thought that was a good thing since we all need to be regularly reconsidering and reexamining our policies and decision-making in light of both learning and teaching considerations and the rapid changes that are occurring in our information landscape. That’s when she thanked me for the call and decided it was time for us to be done.

The transcript of her voice mail message is below. Any thoughts or reactions to this?

Dr. McLeod, I had hoped I could speak with you directly. You don’t know me but I just read your article on administrators and how they should think about Internet safety and, as a 25-year veteran of IT, I want to say that I’m completely offended. This is just sad that you’re setting up this adversarial relationship between administrators and IT with the tone of your letter here and if you think that’s going to help the situation by getting IT departments angry, because that’s what this article will do. Obviously you’ve got some issues there with filtering. I would be surprised if the University of Kentucky is blocking. We don’t block any of the sites you mention but you’re leaving out a lot of very important things regarding the CIPA law with K-12, regarding E-Rate funding, regarding attacks of viruses, malware – it’s just a really simplistic approach when I look at this. I’m really disappointed in that but I don’t think my voice mail’s probably going to change your idea, I just think that you’d be doing everyone a service to not be having such an angry, resentful type of article like that which does nothing more than put a divide between two departments that, by the way, don’t work for each other, they partner with each other. So I would say you might want to rethink that and maybe even present a different article that’s a little less hateful. Thanks.

[UPDATE: A PDF version of these talking points is now available.]

For Leadership Day 2012, I thought I would gather in one place many of the talking points that I use with principals and superintendents about Internet safety…

BONUS 1. Elsewhere in your state – perhaps even near you – are school districts that have figured this out. They operate under the same laws, regulations, rules, and procedures that you do. If they can be less restrictive, why can’t you?

A huge thanks to everyone who has influenced my thinking and my writing in this area, including folks like Doug Johnson, Sylvia Martinez, danah boyd, Will Richardson, and Tina Barseghian. I’m sure that I’ve forgotten a few talking points that I’ll just add later. Which one is your favorite (or least favorite)? What would you add to or change on this list?

For other Leadership Day 2012 posts, see the complete list of submissions and/or #leadershipday12.

Kicking off what I hope is an awesome, seemingly-endless month of resources for school leaders and the programs that prepare them, today I thought I’d share 5 technology leadership articles from AASA’s School Administrator magazine. All 5 focus on superintendents and feature either my thinking or my research.