Workforce data show that U.S. employees continue to do more non-routine cognitive and interpersonal work. [Note: these data tend to be fairly similar for most developed countries, not just the U.S.]

Fewer and fewer employment opportunities exist in America for both routine cognitive work and manual labor, and the gap is widening over the decades. Unless they’re location-dependent, manual labor jobs often are outsourced to cheaper locations overseas. Unless they’re location-dependent, routine cognitive jobs are increasingly being replaced both by cheaper workers overseas and by software algorithms. 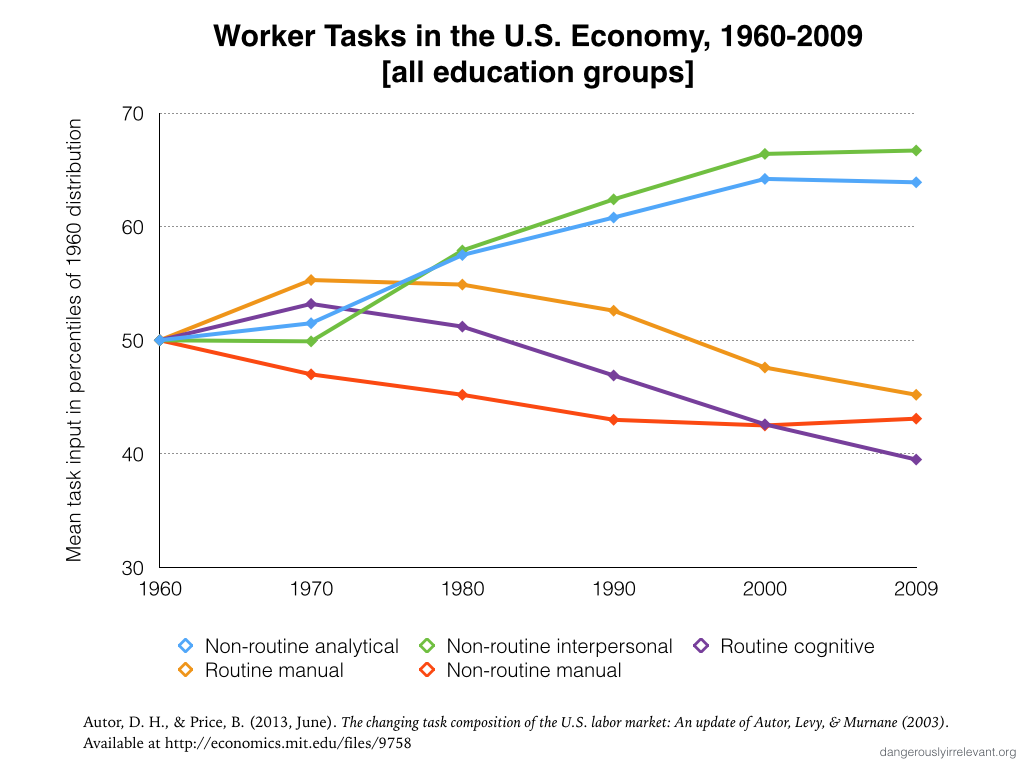 Some information from Autor & Price (2013) that may be helpful…

Which schools are the true ‘miracles?’

Let’s imagine that we lived in an era in which change was occurring incredibly rapidly. An era in which our information landscape was undergoing drastic transformations into new, previously-unimaginable forms. An era in which our economic landscape was destroying rock-solid, stable livelihoods due to threats from geographically-distant workers and/or devices that replaced not just human labor but also human cognition. An era in which our learning landscape was creating unprecedented powers and possibilities but also significant disruptions to deeply-entrenched institutions. An era which required ‘just tell me what to do’ learners and workers to be more autonomous and self-directed, that demanded that they be more divergent and unique rather than convergent and fungible. An era in which a premium was increasingly placed on adaptability, creativity, critical thinking, and collaborative problem-solving – all at a pace never seen before – just to make a basic living.

In this imagined era, would the ‘miracle schools’ touted by the media, policymakers, and educators be the ones that prepared kids to be successful on individually-completed, standardized assessments of low-level learning?

Do your graduates have a what-they-have-done file?

by Scott McLeod | May 23, 2013 | Learning and Teaching, Mind Dump, Workforce and Economy

I asked the lead tech developers of several Cedar Rapids companies what they look for when hiring, and they all responded with, “The applicant’s Github [open source] portfolio.”

Not their test scores or transcripts.

Providing real experience has become the task of the school, and it’s one that has barely been embraced.

3 Megabits per second (Mbps). That’s the peak download speed of Sprint’s 3G mobile phone service. That’s also how Iowa and the United States define ‘broadband’ Internet access: a minimum of 3 Mbps download speed and 0.75 Mbps upload speed. Only 66% of Iowans have access to even this minimal level of ‘broadband’ in their homes. Moreover, one out of every four Iowa businesses is not accessing so-called ‘broadband’ services.

Take a look the map below. See all of the areas that are light green, yellow, or tan? Those are areas for which the maximum – yes, maximum – advertised download speed (as collected by ConnectIowa) is 3 to 6 Mbps or less. That’s the same as Sprint’s 4G mobile phone service. And that’s maximum advertised speed, not even regularly available speed. Those of us with ‘broadband’ access know that these are very different.

According to Akamai, the average connection speed in the U.S. is 7.6 Mbps but the average speed for Iowa is only 6.0 Mbps. Out of 12 states in the Midwest, Iowa’s average Internet connection speed is 11th, better than only Kansas. Even worse, Iowa’s broadband adoption rate dropped 11% from 3rd quarter to 4th quarter in 2012, the only state with a quarterly loss greater than 10%. Most states had adoption rate gains, not losses.

When most of Iowa has anemic Internet access, that doesn’t bode well for economic viability. When most regions in Iowa have Internet access that at best is what we get on a smartphone, that’s not a platform for economic, workforce, and entrepreneurial success.

Today the Internet is essential infrastructure, supporting the ability of individuals and organizations to innovate, build, sell, and serve. Everything is moving to the Web but right now Iowa is far, far behind what it needs for a hyperconnected, hypercompetitive digital, global economy.

We need to foster a diversity of talents

First, much research has shown that what makes a nation or a community prosperous is a diversity of talents (Florida 2002; Chua 2007). Even honeybee colonies with more genetic diversity are more productive (Mattila and Seeley 2007). A society cannot rely only on one type of talent to meet the challenges of the sophisticated, complex, and ever-changing economy, which constantly needs innovations and new industries (Kane 2010). If America had produced just one kind of talent wherein all individuals possess the same skills and knowledge, we would not have Apple® or Google™ or Facebook, or the Internet for that matter.

Second, because of globalization and advancement in technology, today’s society has such diverse needs for different talents that any individual, no matter how unique he or she is, can make a contribution and be successful. While a Lady Gaga may have been of little use in the agricultural society when most people were worried about feeding themselves, today talents like hers are in great demand. Just look at the size of the entertainment industry. Hence, an individual does not have to be one of many and compete by becoming better than millions of others in a narrow spectrum of abilities.

Finally, by necessity, globalization compels us to be unique and different because of the entry of billions of individuals who may have the same abilities and demand less. In other words, if one American wants to compete with a Chinese or Indian person, he has to offer something qualitatively different to global employers (Pink 2005; National Center on Education and the Economy 2007).

Therefore a decentralized system with strong local control and professional autonomy is an effective way to cultivate the diversity of talents that will help keep a nation, a community, and an individual competitive. In contrast, a national common curriculum, enforced through high-stakes common assessment, is just the poison that kills creativity, homogenizes talents, and reduces individuality through an exclusive focus on the prescribed content and teaching-to-the-test by schools and teachers, as we have already seen with NCLB. There is no question that education should help develop some common basics for the purpose of citizenship, but that is the extent to which government can mandate. And for hundreds of years, despite the lack of a national curriculum, the decentralized education system has performed that function well.