Let’s be honest about annual testing 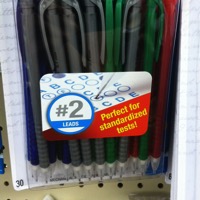 Let’s be honest: students and parents obtain no tangible benefit from large-scale annual testing. Kids and families give up numerous days of learning time – both for the tests themselves and for the test prep sessions whose sole purpose is to get ready for the tests (and maybe also for the testing pep rally) – and for what? The data come back too late to be actionable. The questions are shrouded in secrecy so that no one has any idea what students actually missed. As Diane Ravitch has noted, given the immense amounts of time, energy, money, and personnel that we expend on our summative assessments, “there’s no instructional gain … [there’s] no diagnostic value.” The tests fail the fundamental rule of good assessment – which is to provide feedback to fuel future improvement – and come at a tremendous opportunity cost.

All of this might be fine – students and families might dutifully and kindly take a few hours or even days out of the school year to support their local school’s desire to get some institutional-level benchmarks (like when I was a kid) – if the stakes currently weren’t so high and the problems weren’t so prevalent (unlike when I was a kid). The use of extremely-volatile, statistically-unreliable data to punish teachers and schools… the misuse of assessment results to fuel anti-public-school political agendas… the billions of public dollars that go into the pockets of testing companies instead of under-resourced classrooms… the narrowing of curricula and the neglect of non-tested subjects… the appropriation of computers for weeks on end for testing instead of learning… the recharacterization of schools as test score factories, not life success enablers… no wonder parents are starting to scream. It’s a miracle that more families aren’t opting out of these tests and it’s awfully hard to blame them if they do.

Our assessment systems are a complete mess right now. As parents experience empty-threat tantrums from policymakers, vindictive ‘sit and stare’ policies from school districts, and testing horror story after horror story, they are rightfully pushing back against testing schemes that offer no learning feedback or other concrete benefits to their children. There are looming battles with governors and the federal government around opt-out policies. Put your money on the parents.

Many educators are still running scared on this front. Most schools are still fearful and compliant. Our inactivity makes us complicit. When do we say ‘enough is enough?’ How bad does it have to get before we stand with our parents and our communities? When do we fight for what’s educationally sound instead of caving in (yet again)?

Now, when we talk about the results of the test, they come back four to six months later. The kids already have a different teacher. And all they get is a score and a ranking. The teachers can’t see the item analysis. They can’t see what the kids got wrong. They’re getting no instructional gain, no possibility of improvement for the kids, because there’s no value to the test. They have no diagnostic value.

[It’s as] if you go to a doctor and you say, ‘I have a pain,’ and the doctor says, ‘I’ll get back to you in six months,’ and he gets back to you and tells you how you compare to everyone else in the state, but he doesn’t have any medicine for you. 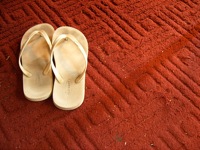 In what is likely to be my favorite post of the week (and, yes, it’s Monday!), Shaun Johnson says:

And if choice advocates don’t like the public accountability system as it snarls at their weaker choice schools, someone should remind them that they all cheered as it tore “failing” public schools limb from limb. Oh, and they also insisted for years that choice schools would leave public schools in the dust, performance-wise. That was one of the reasons for promoting a choice system, wasn’t it?

Jay P. Greene can’t have it both ways. Either public funding should come with test-and-punish accountability, or it shouldn’t.

Being adamantly pro-testing while the tests are used to undermine traditional public schools and then flipping a switch and becoming thoughtfully anti-testing when the same tests threaten to gauge the quality (or publicize the lack thereof) of private schools that are funded with public money doesn’t “feel like” a bait-and-switch.

It *is* the height of cynicism.

Let’s not soften what Jay P. Greene has done here. . . . He has switched his opinion to its polar opposite when the same logic he long applied to the schools he wants to kill was applied (entirely fairly) to the schools he wants to save and replicate. Jay P. Greene even tossed out this gem to bolster his point: “score increases may well be just an artifact of … schools deciding to start prepping students for that high-stakes test… Fordham is confusing real learning increases with test manipulation.”

As the supposed achievement benefits of many education reformers’ initiatives fail to materialize, we are seeing this about-face more and more. Stay alert for further hypocrisy…

Diane Ravitch and technology: Once more into the breach…

I’m trying to see Diane Ravitch’s pro-technology stance. I really am. I thought she was more tempered in Reign of Error. She actually noted some positive affordances of instructional technologies for students and teachers and also appropriately noted concerns about some cyber charter schools. But after yet another derisive statement about how technologies are ‘distracting toys,’ I left the following comment on Diane’s blog:

Diane, lately you have been more tempered with your language regarding educational technology, noting that it has powerful potentials when used correctly and also properly noting the stupidity of some implementation efforts (e.g., L.A. Unified and its iPads). However, you undercut your messaging – and reinforce my earlier concerns about the anti-technology tone of your blogging – when you use phrases like this:

“the ubiquity of distracting electronic toys”

As you know, how we say things is important. I wish you would be more consistent with your nuanced language when it comes to instructional technology. Laptops and iPads and smartphones and other computing devices in schools are not ‘toys’ (as you have stated several times) but instead powerful access vehicles to our increasingly-digital information, economic, and learning landscapes. If a particular implementation is dumb, go ahead and label it as such. But please don’t label all instructional technology efforts as ‘distracting’ or ‘toys.’ 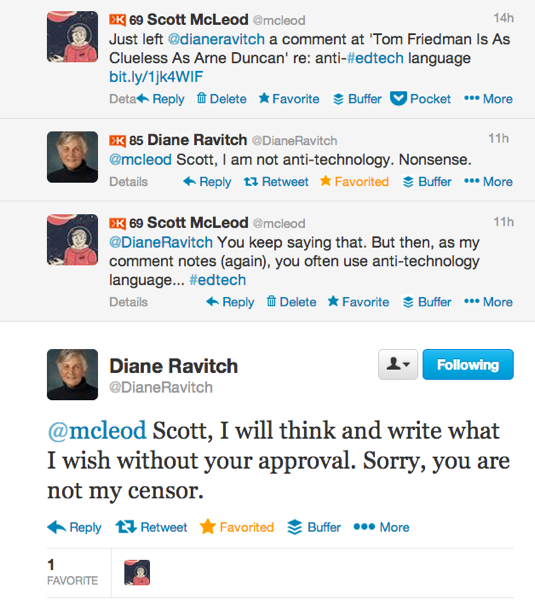 I’ll let you judge whether Diane’s response addressed my claim that she often uses anti-technology language in her writing. And I’ll keep hoping for more nuanced recognitions from her – like I thought she was doing of late – of both the positives and negatives of the digital tools that are transforming our and our students’ lives…

Previous posts on this topic:

It has become obvious over the past decade that the mainstream media not only doesn’t care when black and brown children are harmed by misguided education policy, they typically accept the claims of those inflicting the harm. They report without any criticism the policies that bounce black and brown children around the school district as if they were checkers on a checkerboard. They ignore the protests of the parents of these children when their local school is closed to make way for a privately managed charter or for a condo. It is obvious to everyone but the media that they don’t hear the voices of these children or their parents.

So, yes, it took a condescending comment directed toward white suburban mothers by Secretary Duncan to get the attention of the media. You can bemoan that fact, as Paul Thomas does, or celebrate it as the beginning of coalition politics.

It is beyond argument that those in power will not listen to the poor. But when the black and brown moms (and dads) form a coalition with the “white suburban moms,” they are a powerful force that cannot be ignored.