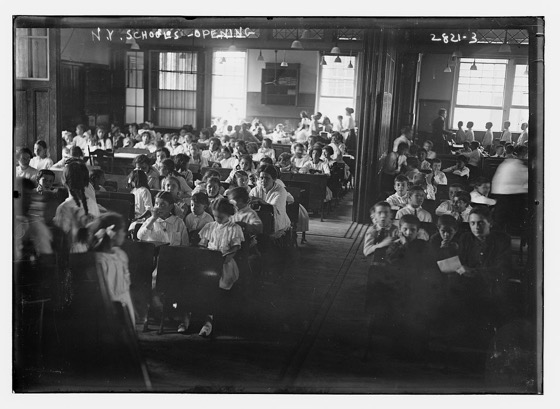 Here is a quote from Kentucky Education Commissioner, Dr. Wayne Lewis (who is a friend of mine). The context is a statewide conversation about higher education standards for Kentucky high school graduates.

On Tuesday, Lewis said the current system already penalizes students by not actually preparing them for success.

“When we give them a diploma without ensuring that they have basic skills and they go to post-secondary education and they hit a brick wall – when they get into those English and math gateway courses, when they don’t have the necessary basic skills or preparation to get a job and take care of themselves,” he said. “Those kids are held accountable right now.”

Compare this with the following quote from Dr. Marc Tucker, outgoing CEO of the National Center on Education and the Economy:

The jobs that were lost to globalization are not coming back. They are being automated. American manufacturing is actually doing very well, but much of the manufacturing work that was done by people a few years ago is now being done by machines. The same thing is true of mining and steel making. The jobs of gas station attendants were automated years ago. The jobs of retail clerks are ebbing fast. Even the jobs in Amazon’s warehouses are being automated. AI-powered systems are doing legal research, diagnosing cancer, writing music, serving as network newscasters, and doing surgery.

The thing that unites the “left behind,” whether they are rural whites in communities with boarded-up storefronts and peeling paint on their homes or urban African-Americans without jobs or any prospect of getting them, is lack of the kind of education and skills that employers are willing to pay decent wages for. . . . The difference between the young people that Facebook is hiring at $140,000 per year for their first jobs and the UBER drivers in the same cities for $10 an hour is their education and skill levels.

With due respect to Wayne, I think Tucker is right. Basic skills aren’t enough these days for many/most American high school graduates to succeed in postsecondary and/or ‘get a job and take care of themselves.’ Basic skills are necessary but insufficient. If we don’t frame future readiness and life success as more than basic skills, we’re doing our students and graduates a grave disservice. As Tucker notes,

What unites the first phase of globalization with the second phase of globalization is the fact that, whether the work is manufacturing or services, whether it is highly skilled or low-skill work, the employer can look for people with the requisite skills anywhere. Whatever your skill level, you are now in competition with people all over the world who have similar skills and who are willing to work for less.

That is bad news for Americans because we charge a lot for our labor. That is especially true for our low-skill and semi-skilled people – people who have basic literacy, but little more. Many nations that were largely illiterate in the 1970s have now built education systems that are capable of producing levels of basic literacy equal to those in the United States, and those newly literate people are now competing directly with the workers in the United States who have only basic literacy, which is roughly half of our workforce. The cruel fact is that our low- and semi-skilled workers – roughly half of our workforce – are very high priced in the global market for labor. That is why their real wages have not gone up in decades. They are a commodity, and the price they charge at the minimum wage level for that commodity is more than they are worth on the global market.

Neither state nor federal policymakers can change that fact. And it is that fact, not unfair trade practices, that is leading ultimately to the kind of anger and despair that is corroding our politics. I refer here not only to the anger and despair of rural and urban working-class whites, but also to the despair of inner-city African-Americans and many Latinos who are also trapped by the dynamics I have just described.

We must have a bigger vision for our graduates than basic skills. And we need to stop using this term as if it were enough.

SIDE NOTE: While we’re at it, we also know that 3rd grade retention is one of the dumbest things we can do in school. As a researcher and former university educational leadership faculty member, Wayne should know better than this.