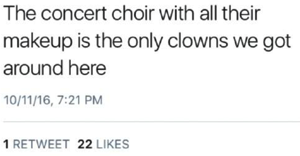 As these and other instances show, one of the more recent challenges for school administrators is students’ use of social media to express their opinions. As Deron Durflinger, Superintendent of the Van Meter (IA) Community Schools notes,

The world we live in today provides ample opportunities for everyone to express their opinions on a variety of topics through social media. The focus in our district is always on helping kids learn how to use the tools that they have at their disposal in the appropriate manner. We want them to share what they are thinking, but we want to help teach them the right way to do it.

What Durflinger describes is frequently a difficult task and it’s not altogether clear that we’re navigating an appropriate balance between school concerns and students’ constitutional rights, particularly when our youth express themselves off campus.

Private schools have it easier – their ability to regulate student and educator speech is governed by contract. If they wish to enact tighter regulations, they merely change the attendance contract and then families decide whether they wish to comply or go elsewhere. Public schools, on the other hand, must navigate a whole host of constitutional protections, state laws, and court decisions.

The general parameters are relatively clear for public school administrators who face student speech situations. The U.S. Supreme Court said in its landmark Tinker v. Des Moines decision that the default rule is that students have constitutional speech rights and that schools must respect those absent a ‘material and substantial disruption’ to the school environment. Later Supreme Court cases articulated some additional exceptions, saying that schools can regulate student speech if it is vulgar and on school grounds, part of the school curriculum, or advocates at a school-sponsored event for the use of illegal drugs.

The same speech that may result in discipline at school, however, often can’t be regulated if at occurs at home. For instance, a school can’t suspend a student for swearing in his backyard even though it could at school. Similarly, a student that expressed unhappiness with her teacher verbally to her friends at home wouldn’t be disciplined, so it’s unclear why putting the same statement in electronic form makes a legal difference. The requirement of a ‘material and substantial disruption’ still applies.

This doesn’t mean that students can say whatever they want off campus. Student threats to cause real harm – like the implied threat in Maine – typically aren’t protected. And sometimes students fall under codes of conduct that accompany extracurricular participation. But in general, students are allowed to have opinions and they’re allowed to express those opinions, particularly when they’re not in school. School leaders can’t suspend students for off campus speech just because they don’t like what they said or how they said it.

Accordingly, I’m not certain that the Michigan student should have been suspended. Yes, he could have been more polite. And, yes, he could have used different wording. But the ‘profanity’ he used was on the lower end of the offensiveness scale (we hear it on network TV, for instance) and there’s not any indication that he was being anything other than a cheeky youth at home. (know any of those? if so, do they deserve suspension?) The suspension of the Florida youth is similarly troubling, particularly if her coach had used the phrase about her first (double standard?) and since bullying typically is legally defined as a pattern of behavior over time, not a single incident.

There are many more examples worth mentioning. The school hockey team captain in Alaska who made racist and homophobic comments on Twitter on his own time. The Wisconsin student who tweeted “eat sh-t” to the state high school athletic association. The Washington student who tweeted the same to the school superintendent. The 20 Oregon students who were suspended for retweeting. And the 12 Colorado students who were disciplined for ‘liking’ a fairly innocuous tweet from a classmate. All of these raise important issues about the balance between school concerns and student rights.

Yes, we want to help students learn polite and appropriate communication. And, yes, we want to prevent bullying. But we also must remember that the First Amendment is intended to protect speech that is unpopular and maybe even upsetting. We must recognize that students have a constitutional right to free expression – sometimes even when it’s coarse, antagonistic, or hurtful – particularly when it is off school grounds. The Supreme Court said in West Virginia State Board of Education v. Barnette:

As school leaders, we must take seriously our obligations to comply with the law, educate our students and communities, and model democratic citizenship and the protection of Constitutional rights. As Durflinger notes, “We can’t get caught up in putting rules into place that not only might violate student rights but also really only apply to 1 to 2 percent of our students. In other words, ‘don’t kill a fly with a sledge hammer.’” If the moral / ethical / legal / administrative angle isn’t persuasive enough, consider also whether we wish to pay six-figure settlements to our students for infringing upon their legal rights.

[cross-posted at Front and Central]