The Online Model United Nations (O-MUN) program is not only a powerful model of global conflict resolution and community building for students. The fact that the traditional Model United Nations (MUN) academic simulation can now take place online makes O-MUN a powerful example of the evolution of Connected Learning principles (see Scott’s post on Connected Learning). And if O-MUN exemplifies the Connected Learning principles of interest-powered, academically-oriented, peer-supported learning, then Junior Online MUN is a powerful extension of this third principle, in particular. It has transformed peer-supported learning into a global mentoring network. 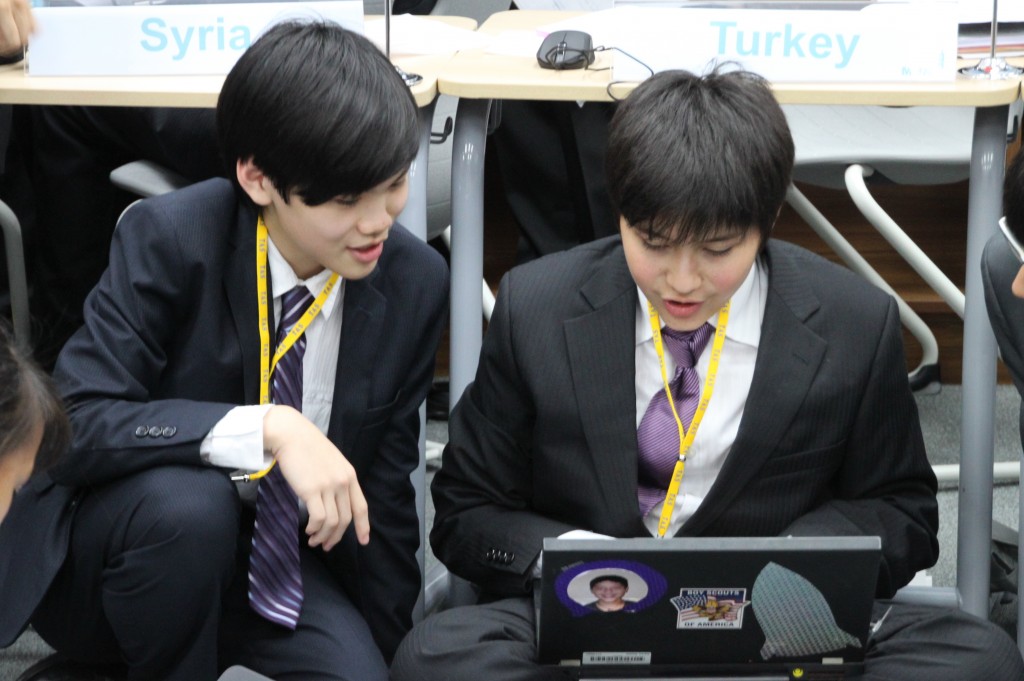 Junior O-MUN epitomizes apprenticeship in the 21st century. Technology tools such as Edmodo and Mightybell provide the means for middle school delegates and their upper school mentors to come together online where the teaching and learning can occur as part of the fabric of their social lives; where the lines between the academic, the personal, and the social are blurred; where the formal and informal co-exist.

Junior Online MUN (jrO-MUN) is the middle school branch of the O-MUN program. It is specifically designed for students in the middle grades to collaborate and debate with a global network of middle school students and upper school mentors using online community platforms (e.g., Edmodo, and Mightybell) and educational software (i.e., Blackboard Collaborate). 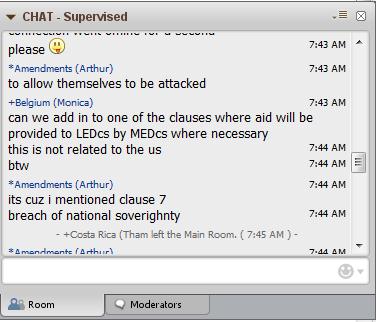 Through pre-debate collaboration and during the online debate itself, jrO-MUN student leaders provide mentorship and support as young delegates navigate the language and procedures of MUN diplomacy. The chat feature of the Blackboard Collaborate debate room is one example of how O-MUN leverages tech tools to facilitate this kind of interaction.

These technology tools provide the means for young people to come together online where the teaching and learning can occur as a natural extension of their social lives. This is apprenticeship in the 21st century. Technology has freed O-MUN to operate outside of the traditional barriers of geographical location and financial burden, as well as the limitations of school-based learning, which requires everyone to sit down together in the same room at the same time within the constraints of the same school schedule and calendar of activities and often subject to teacher availability. Now, in the jrO-MUN program, student masters and apprentices can interact online to prep for and debate global issues – anywhere, anytime.

When middle school delegates sign up for monthly global debates, they are supported by a team of upper school MUN mentors from the global O-MUN community who serve as jrO-MUN Assistants under the supervision of the jrO-MUN Secretary General and Deputy Secretary Generals, as well as O-MUN Founder & Director, Lisa Martin.

Debate prep follows a monthly cycle of collaboration. Middle school delegates are introduced to the global issue debate topic by the jrO-MUN student leaders, who curate a Mightybell collection of resources. Via Edmodo, the younger delegates introduce themselves and the country they will represent, while continuing to suggest research links for Mightybell. As the debate cycle moves ahead, the delegates post country policy statements and eventually propose resolution clauses for the debate, connecting with each other to build alliances and develop arguments. Meanwhile, MUN directors have the luxury of simply observing the Edmodo collaboration, as the team of jrO-MUN Assistants pick up where the lone teacher would traditionally have operated. The Assistants post and reply alongside their young apprentices in the jrO-MUN Edmodo Group, providing individual feedback and group-wide updates, all the while modeling the language and practice of diplomacy. 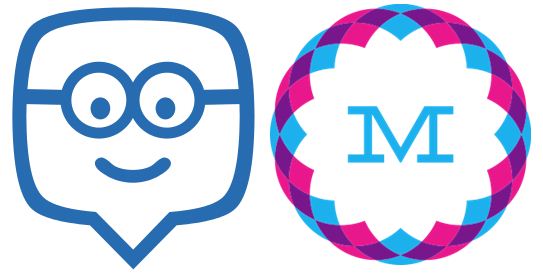 The social context of apprenticeship in this model is essential and the online platforms make this possible. Young delegates have access to a variety of veterans, helping them to understand that there are multiple ways of thinking about international diplomacy and helping them to appreciate a diversity of perspectives to global issue problem-solving. Young delegates have the opportunity to observe others grappling with the issues and completing various tasks in the debate prep cycle. They also see the mentor feedback provided for others so they can self-correct. In this way, the middle school students come to understand that learning is a process but also that there are benchmarks indicating success. Compare this to the limited impact of a single MUN teacher-coach (sometimes managing 30, 50, or even 80 delegates) and the exponential nature of the advantages becomes even more apparent. In fact, even if a student moves to a new school, they can enjoy the continuity of the O-MUN program and the O-MUN community. The jrO-MUN mentoring model derives many important characteristics from the fact that all participants are embedded in a community of practitioners, all practicing and discussing the target skills.

“When I first started MUN many years ago, I learnt primarily from my senior delegates, since there is only so much time a MUN coach can offer. Looking back, I now realize the importance of guidance from strong MUN role models in becoming a strong delegate. Now, as a senior delegate myself, jrO-MUN allows me and other experienced high school delegates to engage in this “pay it forward” system on a far larger scale. Through the jrO-MUN program, experienced MUN student leaders give tutorials on essential MUN skills such as composing and delivering opening speeches. Furthermore, via the social learning platform Edmodo, jrO-MUN Assistants help delegates through the process of researching, writing country position statements, collaboratively composing resolutions, preparing arguments and anticipating counter-arguments, and finally through lobbying and the culminating debate. The jrO-MUN program enjoys all the advantages of Online MUN, but it is perhaps even more relevant to these younger delegates because they get strong guidance from experienced mentors, without needing to worry about monetary or logistical burdens.” – jrO-MUN Secretary General Rohan Sinha (Taipei American School, Taiwan) 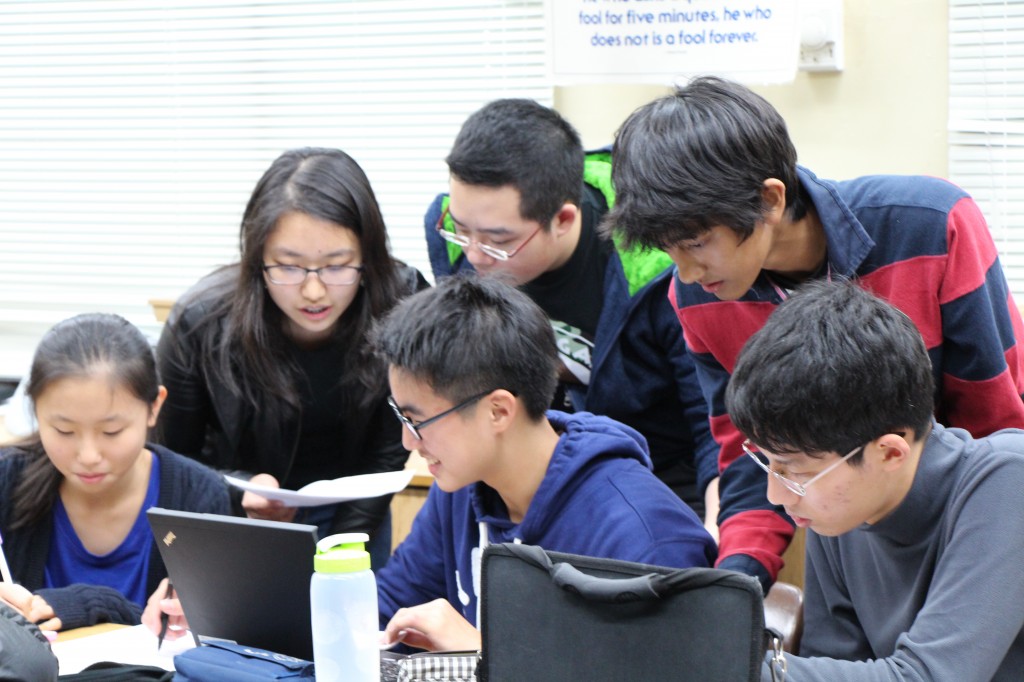 The jrO-MUN program pushes past traditional boundaries of time and space to bring together masters and apprentices to solve global issues. In the example below, Edmodo allows Jasper, who will represent India from his home in Taiwan, to be mentored by Omar, a jrO-MUN Assistant and the Deputy Secretary General of Africa regional debates, who lives in Egypt. 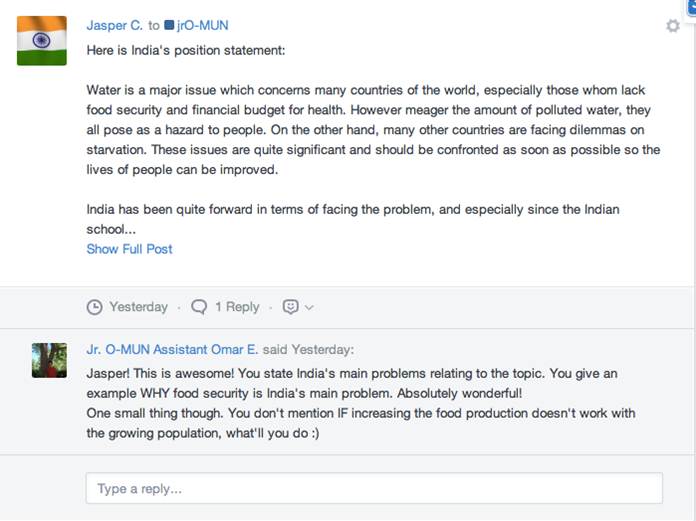 “There’s something very motivating about being part of the online MUN community – perhaps it’s just the kind of dedication that O-MUN attracts – but among our delegates, there seems to be a constant drive to participate, and more importantly to improve. It’s been humbling to watch the zeal with which even our middle school participants approach MUN preparation and debate. I’ve seen complete novices transform into confident delegates in the space of a year. The passion and leadership that O-MUN fosters is truly inspirational to me … as I’m sure it is to our many delegates, too.” – jrO-MUN Deputy Secretary General Sheyna Cruz (Singapore American School, Singapore)

“Mentorship is one of the most crucial and integral parts of the jrO-MUN program because it ensures the quality of our debates and allows delegates of all levels to further their knowledge. The quality of mentorship is one of the key factors explaining the quality of jrO-MUN debates and the success of this program in general. Increasingly, jrO-MUN mentors are graduating from the pool of previous jrO-MUN participants. At this point, it’s just an amazing cycle: experienced MUN delegates continue to raise the standards and expectations of jrO-MUN debates while the younger generation of delegates strives to attain and exceed the standards set by the previous generation.” – jrO-MUN Deputy Secretary General Jessica Chen (Taipei American School, Taiwan)

Through this junior online program, MUN delegates are gaining extra MUN debate preparation, practice, and performance as well as the opportunity to network and collaborate with middle school and upper school students with whom they may well debate face-to-face at future MUN conferences around the world. For example, around 40 students who participated in the November jrO-MUN Global Debate from as far afield as Jordan, India, and Taiwan are looking forward to continuing their collaboration in person at a February MUN conference to be held in Singapore! 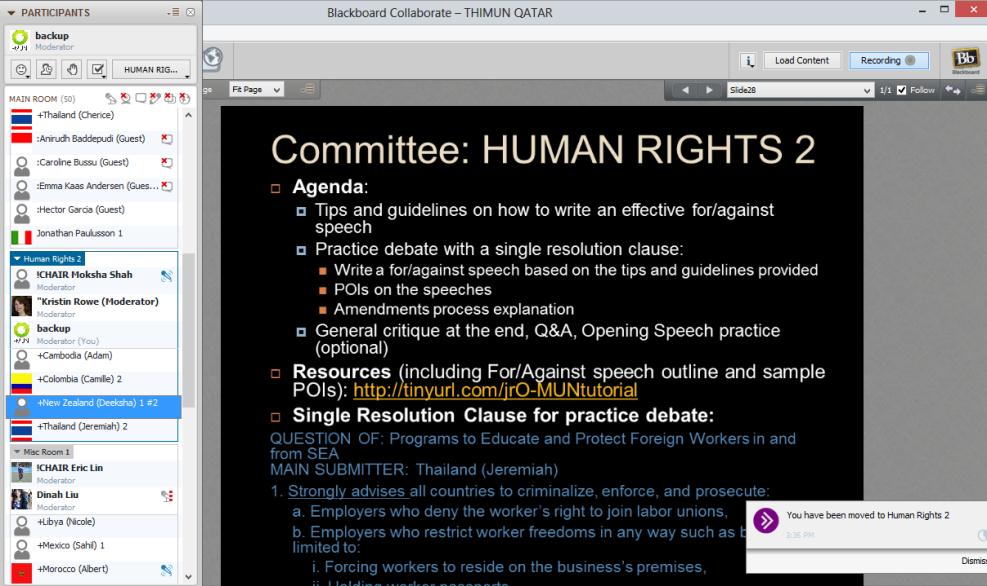 Online MUN was not developed simply to increase MUN student numbers and events. It was developed to take advantage of new educational technologies in order to build a global community that more closely models the true purpose of the United Nations. To paraphrase the United Nation Charter Preamble, the role of the UN is to provide us with the ability to build community, unite our strength, and work together for a better future and the advancement of all.

The most critical aspect of O-MUN program growth thus is this very deliberate and explicit cultivation of a culture of mentorship. Connecting masters and apprentices has been every bit as important as simply starting students earlier with MUN. By creating a cross-divisional mentoring network and building bridges between middle school and upper school MUN participants with open source technology tools, O-MUN is able to unite their strengths and work for the advancement of all.