Over the past month I’ve been reading and thinking about the new Education Blueprint proposed by the Iowa Governor and the Iowa Department of Education (DE) as well as various reactions to that document. If you haven’t yet read Trace Pickering’s insightful (and also lengthy) response to the Blueprint, be sure to do so. Another important read is school change guru Michael Fullan’s recent paper, Choosing the Wrong Drivers for Whole System Reform.

Here are some additional thoughts of my own. These are not all-encompassing – I have additional questions and concerns – but they do constitute a few important issues that caught my attention. I’m also intentionally not commenting on topics for which I’m fairly ambivalent (e.g., charter schools) or don’t know enough (e.g., teacher salary schedules and compensation tiers) and instead will leave those to others who care or know more than I do.

I’ll pick the low-hanging fruit first. Failing 3rd graders who can’t pass some reading assessment is a really, really bad idea. It doesn’t matter how many safeguards and second chances there are and I understand why the policy is being proposed (both educationally and politically). The bottom line is that, regardless of the ‘social promotion’ rhetoric and whatever gut intuition parents or policymakers may have, the research evidence is overwhelmingly unidirectional that in-grade retention does far more harm than good. Desired test score increases often never materialize and, even if they do, they usually don’t persist past a few years. One of the stronger and consistent findings in educational research is that, in the long run, in-grade retention is at best a long-term wash score-wise and the resultant negative impact on students’ psyches and their likelihood to graduate is horrific. The Governor and DE don’t get to advocate for research-driven practices in other parts of the Blueprint but ignore that requirement here.

We can visualize a box that represents the day-to-day occurrences within a classroom or other learning environment. That box is the most important aspect of schooling: if what students and teachers do on a daily basis in their learning-teaching interactions doesn’t change substantially, all hope of achieving ‘world class schools’ in Iowa vanishes. WE LEARN WHAT WE DO. There are a variety of inputs (e.g., standards, curricula, teacher quality, funding and resources, school structures, technology infrastructure, laws and policies) that hopefully impact what occurs inside the box. We also look at what comes out of the box (e.g., student knowledge, skills, and dispositions) to see if what we wanted to happen actually did happen. This is a classic Input-Process-Output systems model (that hopefully is accompanied by a recursive feedback loop that informs the system).

There are 85 main bullet points, or action ideas, in the Blueprint. As you can see in my annotated version of the Blueprint, I tried to place each action idea into one of three categories: Input, Process, or Output (coded I, P, & O in the document). You are welcome to disagree with my categorizations (and I admit I struggled with some of them), but the evidence is quite stark that the Blueprint is overwhelmingly focused on inputs and outputs and gives very little attention to the day-to-day learning and teaching processes that occur between students and teachers. 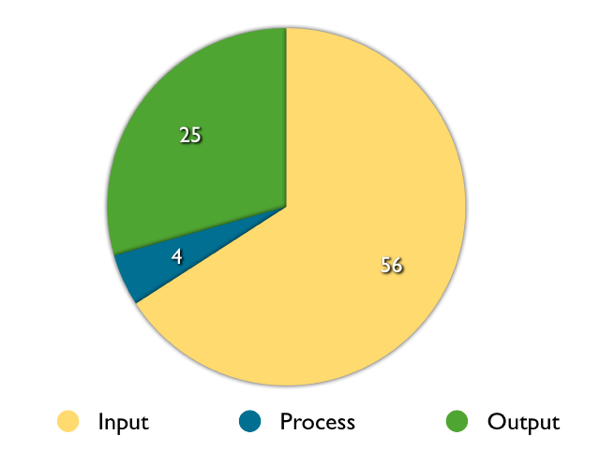 This is unsurprising. This is traditional school reform stuff:

We’ll change some inputs; let’s try better teachers and higher standards. Oh, and we’ll also change some structures around. How about reallocating some monies, reorganizing traditional schools a bit, and allowing for charter and online schools? On the back end, we’ll assess like crazy by changing our tests or using new and/or additional ones.

In the end, we change only a little and, if we’re lucky, we see a little change in results. This is the way most states do it, but it’s neither the only way nor the required way. Where in the Blueprint is the recognition that we need to do something DIFFERENT in our classrooms? Where’s the acknowledgment, for example, that we need to invest heavily in teachers’ ability to facilitate learning environments that foster higher-order thinking skills (an increasing necessity these days)? Where’s extensive language about better facilitating student engagement in their courses? There’s virtually nothing about students’ interest in what they’re supposedly learning. There’s nary a bullet point about student hands-on or applied or problem-based learning or authentic intellectual work (a great program already being piloted by DE, by the way). To the extent that PBL and AIW and similar issues are addressed at all, the Blueprint does so indirectly; all hopes lie with effective implementation of the Iowa/Common Core and the Smarter Balanced assessments. Instead of just holding educators ‘accountable’ on the front and back ends of the process, how about directly investing in them so that they actually can be successful? The overwhelming emphasis of the Blueprint is on accountability rather than capacity-building. Go ahead and do a search in the Blueprint for the terms training or professional development or capacity; you won’t find anything. If DE and the Governor are truly serious about ‘world class schooling’ in Iowa, they should be focusing heavily on the Process box – the day-to-day learning and teaching processes occurring in classrooms all across the state – and right now they’re not.

Much of the Governor’s education concerns appear to be driven by NAEP scores and proficiency levels, despite the fact that most of the items are predominantly factual recall and low-level procedural knowledge AND despite the fact that the designers of NAEP freely admit that the level designations are arbitrary AND despite the fact that the American Institutes of Research notes that most of the nations to which we are comparing Iowa also wouldn’t score well on NAEP. If we want our students to be gaining higher- rather than lower-order thinking skills, end-of-course assessments appear to offer us nothing better. So there’s a lot of new and/or additional testing in the Blueprint that’s focused on stuff you can easily find using Google – or that can be done cheaper by people elsewhere in the world – instead of on the skills and capacities necessary to really foster a world-class citizenry and workforce. We’re not talking about assessments like the College and Work Readiness Assessment or what they do in Singapore. Again, when it comes to higher-order thinking skills, there’s virtually no proposed investment in the Blueprint for the instructional side and all of our hopes rest on the Smarter Balanced assessments, for which right now we have no idea what they will look like and no idea how they will operate. The Blueprint essentially validates and tweaks and expands current testing schemes, despite significant warnings to the contrary from our very own National Research Council.

It’s a globally-connected world out there, but the Blueprint primarily focuses on globalization as an economic force to which we must respond, not a societal / learning / citizenship issue to which we should attend for mutual benefit and empowerment. The Blueprint also says that Iowa students and graduates need to be internationally competitive but most of what it proposes is vastly different from what other countries are doing to achieve better results. The Blueprint contains no significant investment in teacher capacity-building, no emphasis on early childhood education, no amelioration of the impacts of family and neighborhood poverty on learning, and no recognition of the importance of strategic foreign language learning (particularly at younger ages), just to name a few.

It’s also a digital world out there, but you wouldn’t know it given the lack of emphasis placed on technology in the Blueprint. For example, only nominal attention is paid to online learning, despite the fact that it’s booming nationwide and despite Iowa’s meager offerings compared to other states. Even though Iowa ranks abysmally low when it comes to Internet speed and access, there’s nothing regarding the importance of universal statewide broadband Internet access for both educational and economic development purposes. Most damning, there’s absolutely no recognition of the power and potential of digital technologies to transform learning, teaching, and schooling, despite the rapid and radical reshaping of every other information-oriented societal sector by digital tools and the Web. In the world of the Blueprint, it’s as if computers and the Internet essentially didn’t exist. Go ahead and do a search in the Blueprint for the terms Internet or digital or technology; the omissions are quite alarming, actually. There’s one meager shout-out to the rapid growth in 1:1 laptop initiatives across the state, but no support for giving every Iowa child a powerful digital learning device, for providing technology integration assistance for educators, for upgrading woeful infrastructures, for rethinking policies, or for anything else of substance when it comes to educational technology. It’s 2011. Personal computers have been around for three decades and the Internet has been around for at least a dozen years for most of us. Digital technologies are transforming how Iowans and the world connect, collaborate, and LEARN; this omission is both sad and shameful.

There are a few things that I’m glad the Blueprint included. Although there is only a single bullet point referencing competency-based (rather than age-based) student progression, if done well that one thing alone has the potential to significantly and positively reshape much of how we do education in Iowa. I also like the willingness to invest in district-level innovation and to give districts some flexibility. The proof of most of this, like everything else, will depend on the legislative language and the resources committed.

As I think about the Blueprint as a whole (and we are encouraged by the document to treat it as ‘a set of changes designed to work together’), it feels like a lost opportunity. The Governor and DE had the chance to dream big and swing for the fences. They had the chance to propose impactful, sweeping changes to the current system. They had the chance to create learning and teaching environments that prepare students for the next 50 years rather than the last 50 and to educate the public as to why those changes are necessary. The Blueprint rhetoric is right but the action items fall far short. I don’t know if it’s a lack of knowledge or vision or courage that’s holding them back, and of course there are political considerations with all of this. But the result is a a tweak of the current system, a tinkering at the edges rather than a rethinking of the core. Perhaps it’s foolish of me to wish for more.

I welcome all feedback. Thanks.