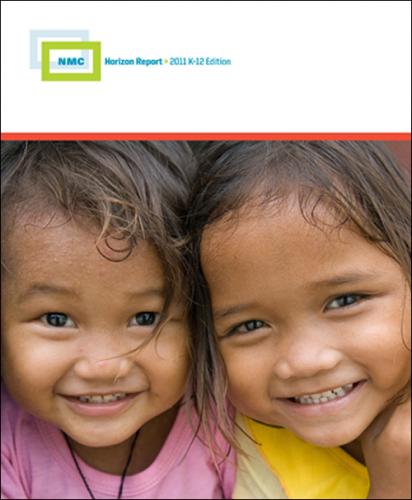 I asked fellow BigThink blogger Kirsten Winkler if she would join me in writing about the recently-released 2011 K-12 Horizon Report. She’s done a nice job of summarizing the six trends highlighted in this year’s report and I encourage you to perhaps read her post before you read this one. I confess that she’s more positive than I am about the state of K-12 educational technology, perhaps because of her start-up perspective.

Although the postsecondary series of Horizon Reports started back in 2004, there only have been three annual reports so far aimed at elementary and secondary educators. Like those aimed at higher (tertiary) education, the K-12 reports attempt to identify “six emerging technologies or practices that are likely to enter mainstream use in the educational community within three adoption horizons over the next one to five years” (2011, p. 3, emphasis added). Here’s what the reports have identified so far for elementary and secondary schools: 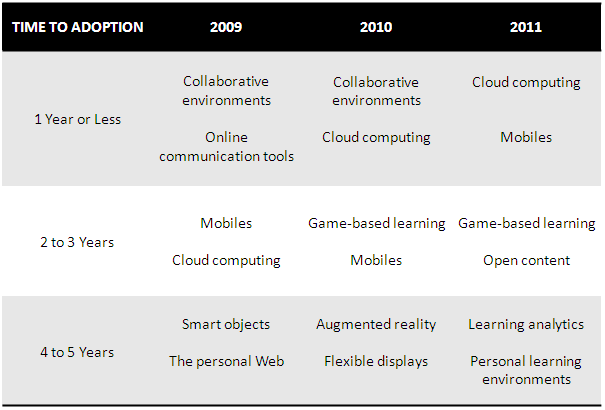 According to the three reports, your average educator today should now “be work[ing] across geographic and cultural boundaries more and more frequently, … recogniz[ing] the importance of collaborative work [environments,] and … finding that online tools … provide [her and her] students with opportunities to work creatively, develop teamwork skills, and tap into the perspectives of people around the world with a wide range of experiences and skills that differ from their own” (2009, p. 5). She also should now be using instant messaging, desktop video conferencing, and other online communication tools to open up “a new world of experiences” for students (2009, p. 5). Additionally, mobile computing devices and cloud computing should be on the verge of mainstream educator usage, with augmented reality right around the corner.

I don’t see it happening. Are some teachers doing this? Absolutely. Are more educators doing these things than before? Yes, thank goodness. Are these tools now in the mainstream of K-12 educational practice? Not a chance, except in isolated schools of excellence. We still have too many teachers who have no clue what Google Docs or Twitter are, for example. We still have too many administrators who are blocking mobile learning devices and are fearful of online learning spaces. And so on…

Here’s what I think we have seen instead: mainstream adoption and growth of replicative technologies (i.e., those that allow teachers to mirror traditional educational practices only with more bells and whistles). These are what Hughes, Thomas, & Scharber (2006) would call technology as replacement or, perhaps, technology as amplification. Replicative technologies include, but are not limited to, the following:

Each of these replicative technologies introduces affordances beyond its analog counterpart. The bottom line, however, is that even when digital technologies are used in classrooms or online, we still primarily see learning environments where teachers push out information to student recipients and then assess students’ factual recall and low-level procedural skills (i.e., the stuff you can find on Google in 3 seconds). When the technologies are used, it’s primarily the teacher using them, not the students. They’re teacher-centric tools, not student-centric tools.

Foreseeing the future is admittedly difficult work. In a world that’s changing as quickly as ours, predicting even a few years out is extremely challenging. While commendable, the vision of the Horizon Reports toward more divergent, student-centered uses of technology runs into the realities of school practice and educator belief systems. To the extent that school traditions and desires for control are going down, they’re doing so kicking and screaming all along the way.

Replicative technologies are the easiest for teachers to adopt because they’re the shortest path between current practice and new tool usage. They’re also the easiest for school leaders to stomach because they look fairly familiar and cause less angst regarding perceived issues of pedagogical control and disruption. We would expect replicative technologies to be a natural step along the journey of educators’ technology adoption. The question is whether educator adoption of replicative technologies eventually will lead to more transformative, student-centered uses of digital learning tools or whether the current wave of educator tool usage simply will be replaced by whatever is the next generation of replicative technologies (just as the chalkboard was replaced by the overhead projector, which then was replaced by the interactive whiteboard). I think that question is still open for consideration. Until it gets resolved toward the former rather than the latter, the Horizon Reports will continue to be overly optimistic regarding the pace of adoption in our schools of more disruptive digital learning tools such as game-based learning or personal learning environments.