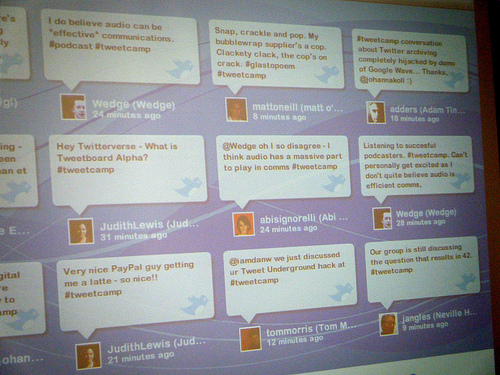 Electronic ‘backchannels’ at conferences are commonplace these days. But are we ready for teachers who try to incorporate backchannels into their classroom instruction?

Earlier this month the New York Times profiled the use of classroom backchannels by Iowa teacher Erin Olson and other educators. The article has prompted 144 comments to date. Here are the 5 ‘most recommended’ comments as of this morning:

The first somewhat positive comment on the ‘most recommended’ list is #8. And the next positive one is #14. And so it goes…

Many technology bogeymen are invoked. For example, one commenter said, “The generation that is still in school today has taken technology to a new level, replacing face to face interaction with a digital facade that allows for all sorts of perversion.” Another said, “Currently, many students are unable to articulate their opinions aloud. Educators should be concentrating on this lack of ability or else we will be witnessing a silent generation with enlarged thumbs.” And another said, “They’re shopping for shoes.”

In response to Erin’s use of what looks like a classic ‘fishbowl’ conversation technique, one commenter said, ”Even the photograph of this English class adds a sense of impersonality to the learning environment.” Another said, “In a few short decades, these students will be running the country. I have to wonder, if an unexpected solar storm were to knock out Twitter, Facebook, and texting, would these folks be able to have an actual conversation and deal with the crisis, or would we all just die?” And so it goes…

As we incorporate new and varied technology tools into our classrooms, they not only have to make sense to us educators but also to our families and communities. How well are we doing at explaining what we’re doing (and why) to those that we serve?