A Denominator of Many – Teacher Professional Partnerships [guest post]

By now it is an old story but still a pressing contemporary issue. Industries that have traditionally relied on a top-down hierarchy of power distribution are folding. We see it today most readily in the newspaper industry but it is painfully obvious that other industries, especially those who deal in information currency, are under siege as well. It is clear that the schools are a part of this list.

Traditionally, or for as long as anyone alive today can remember, most school systems have operated under a very clear top-down hierarchy. The Department of Education passes down edicts to states. State Departments of Education (headed by a commissioner) then pass funding & accreditation requirements and curriculum standards down to school districts. School districts are headed by superintendents operating with an authority given to them by school boards delegating responsibilities to principals and other building administrators. These administrators then delegate responsibilities to teachers and other school employees who then deliver the state mandated standards-driven curriculum to students. I realize this is a very simplistic picture of our school systems and there are great differences in the nuances between schools but for the most part this is the type of system most of us operate under. 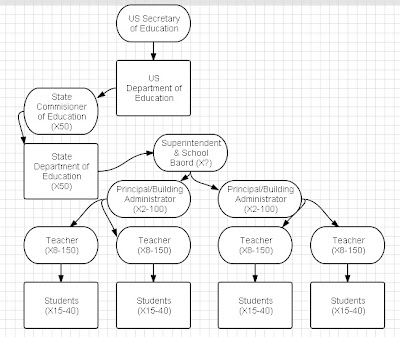 This system was very efficient for many years and was necessary for a long time. However, when we hear criticisms of schools operating under an industrial model of education looking more like factories it is not just what goes on in the classroom that causes this comparison but also how they are structured. This structure looks like almost any corporate business hierarchy with the CEO and shareholders at the top and the workers and consumers at the bottom. Just as the corporate structure is designed to make as much profit for those at the top this system best ensures that the needs of those near the top of the pyramid are met. Today, in education, this hierarchy is most concerned with administering RTTT and NCLB measures like curriculum standards. Hence, the overly high concern with high stakes testing and “teach to the test” messages many of our teachers end up hearing. Who does this system serve? With whom lies agency in learning? There is a new structure of learning emerging that is gaining momentum, one which appears to have no regard for edicts issued via a top-down hierarchy. Web 2.0 & social media technologies have given teachers and students agency in their own learning through the creation of what has been collectively referred to as “personal learning networks” (PLNs). Through PLNs learners choose their own learning agendas and self-select who they listen to and what curriculum (if any) they follow. Through the use of popular technologies like Twitter, YouTube, Blogs, and Facebook informal learning is quickly becoming a viable option. Teachers no longer have to look to their school system for support, they can find it through the networks they have created. This same kind of network structure and powerful informal learning is also what has made this latest phenomenon of unschooling actually seem like a viable option for some. The more our networks grow the more they challenge the authority of the traditional top-down hierarchy.

While unschooling is a little bit extreme and probably not right for most kids the fuel giving this movement momentum is something we need to address in education or our formal institutions of education will suffer the same fate as the newspaper industry. I am reminded of this slide from a TED Talk by Devdutt Pattanaik called, East vs west — the myths that mystify.. 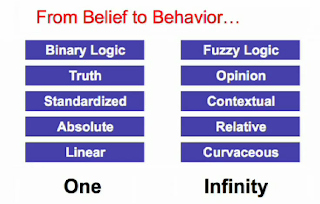 In this talk Dr. Pattanaik discusses how the fundamental belief structures between east and west cultures clash. He illustrates this with a simple story about Alexander the Great meeting a gymnosophist, “When they met, the gymnosophist asked what Alexander the Great was doing. To which he replied, ‘I am conquering the world. What are you doing?’ ‘I am experiencing nothingness,’ replied the gymnosophist.” Neither could see the point in the others endeavor because the denominator for Alexander’s life was One and the denominator for the gymnosophist’s life was Many. This fundamental element of belief informed everything about how both individuals interpreted these actions. The traditional hierarchy that has dominated our school systems has a denominator of one while PLNs, student-centered learning environments, and movements like unschooling operate with a denominator of many. If our industry is going to survive we need to find a way for both equations to find a common denominator. We have to look for ways to invert this hierarchy.

One potential method that our schools could use to help address this issue of one verses many is teacher professional partnerships (TPPs). TPPs are similar to law firms where the practitioners own their own practice. In TPP schools there is no administration but instead the teachers in the TPP work together to share the responsibilities normally delegated to building an district administrators. This solves a few problems that teachers and schools face. First, it brings more decision making responsibility closer to those who are directly effected by those decisions. It places agency closer to those served by schooling and in so doing elevates the teaching profession. With agency comes responsibility and built-in accountability. If a teacher is held responsible for their own performance via a personal stake in ensuring that they offer a quality learning environment that students will want to participate in there will be no need for complex systems of teacher performance pay or other measures like those in RTTT. With a TPP a teacher’s performance is shown in their enrollment and whether a school thrives or fails depends entirely on how well they manage their own practice. What’s more, TPPs eliminate the need for teacher unions since the partnership is in itself a union of sorts.

Currently there are just ten TPP public schools in operation in the United States and so far they all appear to be doing well. This model of school organization holds a lot of potential addressing the problems and issues facing schools and education including the inevitable irrelevance of our traditional school hierarchy. Ted Kolderie from Education|Evolving will be Steve Hargadon’s guest on his Future of Education series this Thursday, July 8, 2010 to discuss Teacher Professional Partnerships. For more information on TPPs I urge you to attend this free online discussion in Elluminate or at least listen to the recording afterwords.

Carl Anderson is an art and technology teacher, technology integration specialist, and adjunct instructor for Hamline University’s School of Education. He writes the Techno Constructivist blog and is @anderscj on Twitter.