My goal for June: 30 days, 30 book reviews. Today’s book is Liberating Learning: Technology, Politics, and the Future of American Education by Terry Moe and John Chubb. I posted seven quotes from the book last fall. Several readers asked me to chime in with my opinion of the book. I’m finally getting around to doing so!

What I liked about the book

Moe and Chubb’s book can be summarized by two quotations from page 145: 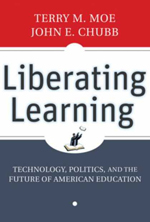 Chapters 3 and 5 elaborate most fully on the first premise. Chapter 6 is where the authors explain most of their second premise. I agree with the authors’ assertion that technology is

an exogenous social force that originates from outside the education system, is transforming nearly every aspect of American . . . life, and will keep transforming it in the decades ahead. (p. 151)

I liked the authors’ discussions of both virtual schooling and data-informed teacher evaluation. I didn’t always agree with what the authors said on these topics but they gave me much food for thought.

I also appreciated learning more about the two charter schools in Dayton, Ohio that the authors profiled. I’d like to learn more about those schools’ day-to-day operations in order to get a better sense of the students’ experience.

The authors gave me LOTS to think about in this book. Several of their perspectives on educational technology are ones to which I hadn’t given much attention. I’m not informed enough yet to have a definite opinion about some of their assertions, but at least I now know that I’ve got some new cognitive roads to travel.

I was really excited to read this book after Chapter 1, which was a short, 12–page introduction. Chapter 2 was fine (and expected): a restatement of international test results and other indicators of American schools’ current struggles. Then I read Chapter 3, which was essentially a 27–page rant against teachers unions:

if anything is stone-cold certain about the current structure of power, it is that technological change is destined to be resisted by the teachers unions and their allies. This is “their” system, and they are compelled by their own interests to preserve and protect it. They will go to the ramparts to see that technology does not have real transformative effects. (p. 55)

Although I got the authors’ point (quite clearly!), and even agreed with some of what they said, I thought that the tone and overall approach of the chapter was over-the-top. Many educators will not make it through Chapter 3 because they’re too disgusted – not with what the authors say but how they say it. This is too bad because I think the book is definitely worth reading.

The other main problem I had with the book is that the authors seemed to make a large jump from correlation to causation in Chapter 5. They had several graphs that are intended to illustrate teacher unions’ resistance to desired reforms. However, I would have liked to have seen more concrete examples of teacher unions’ opposition to various educational technology initiatives. Although they do this somewhat within the contexts of virtual schooling and data-informed teacher evaluation, those are only two of the many, many issues related to P-12 educational technology. It’s a leap to say that unions’ objections to certain aspects of these specific reforms are equivalent to an overall resistance to technology integration in the classroom. I have yet to see many teachers unions at any level come out with explicit policy statements or bargaining actions against classroom-level uses of technology (if you have some, I’d love too see them).

See these quotes from last fall:

Teachers and administrators . . . are subject to expectations all around that they modernize their schools and keep up with the times. They also live in the same technologically oriented society that parents, students, and public officials do. . . .  they have good reasons to seek out technology on their own, and not to remain permanently stuck in the outdated pencil-and-paper mode of yesteryear. The problem, however, is that they only have incentives to make the most incremental of changes – changes that are helpful but don’t threaten anyone’s jobs or established routines. Their approach to technology is rooted in the status quo. It is about how to make the existing system work better without really changing it. (pp. 104–105, emphasis added)

The common theme [of student surveys] is one of frustration. Students complain that there are too few computers, too many limits on computer time and Internet use, and too little reliance on computers for class assignments and research. . . . What they want is a technology-rich educational environment in which they have the freedom to roam and discover and interact. What they get . . . are limited computer and Internet resources, lots of restrictions, teachers who lack knowledge and interest in technology – and an approach to education that looks pretty much as it always did. (pp. 105–106).

The long-standing idea that there is something intrinsic to schooling that makes it immutably labor intensive and immune to technological change is simply not true. Maybe it was in the past. But it isn’t now. Technology can be substituted for labor. (p. 157)

Questions I have after reading this book

I give this book 4 highlighters (out of 5). Although the incessant bashing of teachers unions gets old pretty quick, the authors also gave me many new lenses through which to view educational technology policy and reform. Take Chapters 3 and 5 with a grain of salt, but don’t avoid the book because of them.

[See my other reviews and recommended reading]