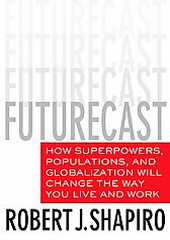 I’m reading a fantastic book right now: Futurecast, by Robert Shapiro. In the section on globalization, Shapiro notes that the first waves of globalization primarily affected manufacturing. Millions of American jobs were 'offshored' in the 1970s and 1980s as global companies set up factories overseas instead of here in the U.S. For all of the current rhetoric about ‘Benedict Arnold’ corporations that offshore jobs, they essentially have to since their competitors are doing so. Few companies can survive in a hypercompetitive global economy when they’re paying labor rates 5 to 25 times that of the competition. FYI, the average manufacturing worker earns between $21 and $25 per hour in the USA, France, and Japan. Contrast that with the average hourly rate of a manufacturing employee in Korea ($14), Taiwan ($7), or Mexico ($3). Or recognize that factory workers in China or India earn an average of less than $1 an hour. It’s easy to see why any manufacturing job that can be offshored probably will be offshored.

Although manufacturing has been an important component (about 20%) of the American economy, the services industries are a much larger segment (about 60%) of our economic productivity. Shapiro notes that in the next 10 to 15 years, we’re going to see this employment sector dramatically impacted by globalization and offshoring due to advances in software. It is now possible to take many complex service jobs and break them up into component parts, much as we did in previous decades for manufacturing work. Once these tasks are disaggregated, it becomes much easier to train lower-skilled workers to do these discrete components of the overall work, facilitated by software. In other words, instead of companies needing highly-paid American workers, developing countries ‘will be able to train millions of their young people to carry out discrete subsets of those jobs’ (p. 103). Corporations ‘can divvy out the pieces of larger service jobs to any number of professional staffs, connected through Internet networks, and then assemble the results in one place’ (p. 104) [again, like in manufacturing]. As you can imagine, the impacts of this on the American economy are going to be quite significant.

Yet another reason to teach our students to be adaptive and for them to spend as much time as possible on higher-level cognitive work (i.e., the kind of work that can’t be turned into piece work).