A tale of two posts: The vortex and the virus

As David pointed out, two posts from a couple of weeks ago fostered a great deal of conversation in the blogosphere. Both were impactful, but in very different ways. The first one was Will Richardson’s post about 21st century skills for educators (and presenters). The second was my post highlighting seven videos that students had taken of their teachers during class. Since the target audience for the work I do at CASTLE consists of school administrators who mostly tend to be unfamiliar with the blogosphere, I thought it might be helpful to dissect the two posts a bit to illustrate some of the power and potential of blogging.

It’s fun to get comments on a blog post. I know that I eagerly check my Recent Comments section each day to see if anyone has chimed in on what I’ve written. In fact, the feedback can be addictive, sparking the desire to write more and expand the conversation. Those of us who blog know, however, that most of our posts get a handful of comments at best and often get none at all.

In contrast, Will’s post was a veritable vortex. He started a conversation that drew in numerous people and inspired them to participate and to return again later to check in on its progress. A multitude of comments swirled around and doubled back on each other and, like a tornado, new discussion threads were sucked in and incorporated into the larger whole. Will’s post took on a life of its own, a storm of conversation that grew in unforeseen ways. Will was the first to admit that the conversation that occurred was far bigger than he ever could have anticipated at the onset.

How do we capture the impact of a post like Will’s? Well, we can do a simple count of the total number of comments: an astounding 164! Recognizing that online readers rarely have to scroll down more than a few screens worth, we also can note that the total commentary represents 119 screens’ worth of information (at least in my browser). My copy-and-paste of the entire dialogue into Microsoft Word reveals a count of 713 paragraphs over 63 pages (Times New Roman, 12–point font): a total of nearly 23,000 words! Or we can use Britt Watwood’s innovative approach and represent the conversation as a word cloud (below is the one I just made in ManyEyes): 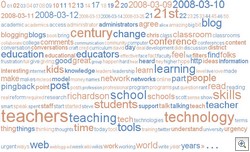 I’m sure there are other ways to think about and represent a vortex-like post. The essential idea here is that a blog post of this nature draws in outsiders and keeps them swirling around the central core (the post itself).

If Will’s post was notable for the number of comments it spawned on his blog, my post illustrates the other kind of impact that a blog post can have: the ability to spawn conversation and connections in places other than the original blog. Similar to a nuclear chain reaction that continuously sparks additional activity further and further out, a virus-like post captures the attention of others and inspires them to comment, not on the original blog but on their own blogs. In other words, the original post ‘infects’ a few other bloggers, whose posts ‘infect’ even more people, who in turn ‘infect’ even more, and so on. Commenting and hyperlinking is occurring in a variety of different places, many far removed from the original post. In its totality, a rich, complex dialogue is occurring. It’s just difficult to figure out where.

Although conversations that occur across the blogosphere are much more difficult to monitor due to their dispersed nature, Technorati, a blog search engine, can help. After searching for the URL of my post in Technorati, I painstakingly went through the results. I visited each unique blog link, read what it had to say about my post, and counted how many comments it had garnered. I also put the URL of each of those posts into Technorati to see how many links they had garnered in addition to my original post. The table below shows that my original post garnered 88 comments and that 57 other blog posts linked to it. Those 57 posts in turn sparked another 198 comments and another 92 blogs linked to them. If I was ambitious, I could have searched each of those 92 secondary links on Technorati to see which of the 57 were cross-linking to each other, if there was a third level of additional blogs linking to those 92, etc. However, what I did was already very time-intensive so I decided to stop.

The essential idea for a virus-like post is that much, if not most, of the conversation is swirling around outside the original blog.

Two types of blog posts. One that generates conversation on-site. One that sparks discussion out in the wild, wooly world of the Web. Is one kind of post better than the other? Nope. But together, these two kinds of posts illustrate the powerful and interesting connections that can occur across geography and time if we choose to take advantage of the affordances that these technologies lend us.