The U.S. has more memorizers

The U.S. has more memorizers than most other countries in the world.

Federal policy under No Child Left Behind (NCLB) and the Department of Education’s ‘flexibility’ waivers has sought to address [the problem of international competitiveness] by beefing up testing policies — requiring more tests and upping the consequences for poor results: including denying diplomas to students, firing teachers, and closing schools. Unfortunately, this strategy hasn’t worked. In fact, U.S. performance on the Program for International Student Assessment (PISA) declined in every subject area between 2000 and 2012 — the years in which these policies have been in effect.

Now we have international evidence about something that has a greater effect on learning than testing: Teaching. The results of the Teaching and Learning International Survey (TALIS), released last week by the Organization for Economic Cooperation and Development (OECD), offer a stunning picture of the challenges experienced by American teachers, while providing provocative insights into what we might do to foster better teaching — and learning — in the United States.

In short, the survey shows that American teachers today work harder under much more challenging conditions than teachers elsewhere in the industrialized world. They also receive less useful feedback, less helpful professional development, and have less time to collaborate to improve their work. Not surprisingly, two-thirds feel their profession is not valued by society — an indicator that OECD finds is ultimately related to student achievement.

Nearly two-thirds of U.S. middle-school teachers work in schools where more than 30 percent of students are economically disadvantaged. This is by far the highest rate in the world, and more than triple the average TALIS rate. The next countries in line after the United States are Malaysia and Chile.

simply reporting results, in daring headline fashion, without caution, without caveat, is a dangerous practice. Although cautious reporting isn’t nearly as sensational as crying “Sputnik!” every time the next cycle of PISA results are reported, it is the responsible thing to do.

This holds true, of course, for all other assessment results as well. I am continually amazed at how many press releases become ‘news stories,’ sometimes nearly verbatim. Too many educational journalists have abdicated their responsibility to ask questions, to investigate claims and evidence, to cast a skeptical eye on puffery, and to try and get to the truth…

What does the PISA report tell us about U.S. education? [VIDEO]

An excellent video from AFT about PISA and education reform lessons to be learned. Watch it. Share it. #reclaimit

in a somewhat more nuanced study in January of this year entitled “What do international tests really show about U.S. student performance?” economists Martin Carnoy and Richard Rothstein come to a similar conclusion:

“The share of disadvantaged students in the U.S. sample was the largest of any of the [post-industrial] countries we studied. Because test scores in every country are characterized by a social class gradient—students higher in the social class scale have better average achievement than students in the next lower class—U.S. student scores are lower on average simply because of our relatively disadvantaged social class composition. . . [I]f we make two reasonable adjustments to the reported U.S. average, our international ranking improves. The first adjustment re-weights the social class composition of U.S. test takers to the average composition of top-scoring countries. The other re-weights the distribution of lunch-eligible students by the actual intensity of such students in schools. These adjustments raise the U.S. international ranking on the 2009 PISA test from 14th to 6th in reading, and from 25th to 13th in mathematics. While there is still room for improvement, these are quite respectable showings”

To put it succinctly, the “achievement gap” between American students and their foreign counterparts is largely a red herring.

About those PISA scores…

Here are PISA scores for 15-year-olds as typically presented by politicians. When you see these, it’s easier for Americans to be more alarmist (oh no, others are ahead of us!). 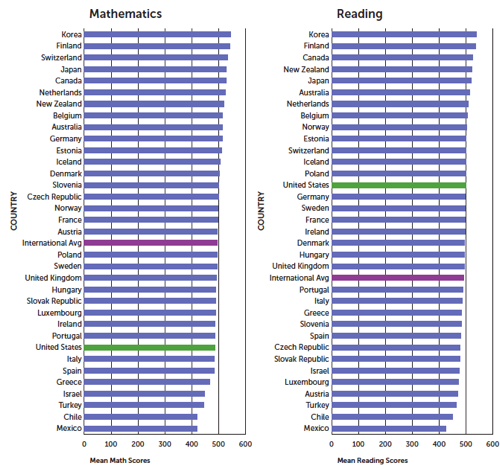 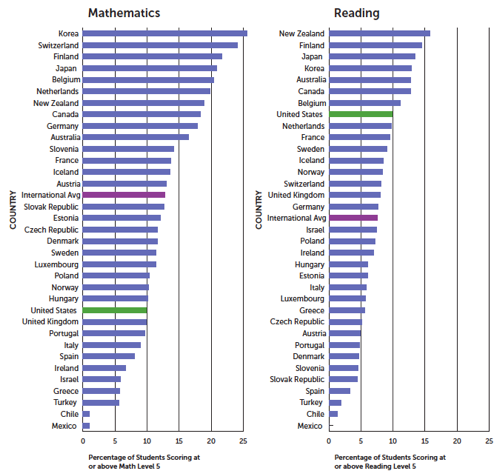 But we also should look at the data another way. 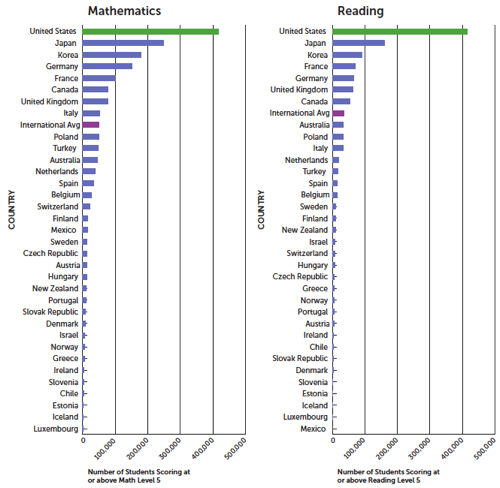 Our size benefits us, and we need to remember that too. [of course we have many more LOW scorers as well…]

Does the fate of America rest on how well our children bubble in answer sheets?