Federal policy under No Child Left Behind (NCLB) and the Department of Education’s ‘flexibility’ waivers has sought to address [the problem of international competitiveness] by beefing up testing policies — requiring more tests and upping the consequences for poor results: including denying diplomas to students, firing teachers, and closing schools. Unfortunately, this strategy hasn’t worked. In fact, U.S. performance on the Program for International Student Assessment (PISA) declined in every subject area between 2000 and 2012 — the years in which these policies have been in effect.

Now we have international evidence about something that has a greater effect on learning than testing: Teaching. The results of the Teaching and Learning International Survey (TALIS), released last week by the Organization for Economic Cooperation and Development (OECD), offer a stunning picture of the challenges experienced by American teachers, while providing provocative insights into what we might do to foster better teaching — and learning — in the United States.

In short, the survey shows that American teachers today work harder under much more challenging conditions than teachers elsewhere in the industrialized world. They also receive less useful feedback, less helpful professional development, and have less time to collaborate to improve their work. Not surprisingly, two-thirds feel their profession is not valued by society — an indicator that OECD finds is ultimately related to student achievement.

Nearly two-thirds of U.S. middle-school teachers work in schools where more than 30 percent of students are economically disadvantaged. This is by far the highest rate in the world, and more than triple the average TALIS rate. The next countries in line after the United States are Malaysia and Chile.

The vocal opposition we see to data collection efforts like inBloom, to curriculum standards (which define the data to be collected) like the Common Core, and to tests (the data source) like the MAP can all be traced back, largely, to two things: (1) dismay over how much class time is sacrificed for the all-encompassing data hunt, and (2) a foundational mistrust regarding the aims of those who gather and control the data. If your dad brings home a new baseball bat, it’s a pretty happy time in the family – unless your dad has been in the habit of beating the family with blunt objects. Data is that baseball bat. A better analogy might be a doctor who causes his patients pain unnecessarily with his medical equipment. Patients are naturally going to resist going in for procedures that the doctor says are “good for them” if they know it will come with excessive pain. There is a vigorous campaign online and in the papers and political buildings to discredit opponents of school reform as just so many Chicken Littles “defending the status quo” and sticking their heads in the sand. A salient question, though, is this: has the sector-controlling school reform movement, going back to the dawn of No Child Left Behind, wielded data honestly, ethically, and constructively? If not, then yeah, there will be resistance. These people aren’t Chicken Littles. They’re Chickens Who Won’t Get in the Pot.

Student achievement and teacher evaluations: The math doesn’t add up? 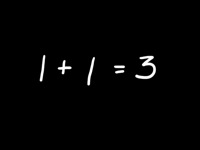 Many states are applying for NCLB waivers. But they are adopting teacher evaluation criteria that are statistically, professionally, and morally inappropriate. As Education Week notes:

Federal officials say they have generally approved systems in which student growth counts for between 20 percent and 50 percent of a teacher’s evaluation. But also acceptable is a “trigger” mechanism, like one in Arkansas, where a teacher can’t be rated as effective if he or she fails to meet expectations for student growth.

Another acceptable method is a matrix system, like one in Massachusetts, in which student growth doesn’t receive a specific weighting but is coupled with other measures, such as unannounced teacher observations.

though precise estimates vary, the preponderance of evidence shows that achievement differences between students are overwhelmingly attributable to factors outside of schools and classrooms.

Let’s simplify this even further:

Does anyone want to argue that this is fair or reasonable or valid?

This can’t be said enough: It is morally inappropriate (and probably illegal) for policymakers to evaluate teachers and hold them ‘accountable’ for factors beyond their control. But that’s exactly what appears to be happening in state after state after state.

In Iowa, lawmakers and our new Commission on Educator Leadership and Compensation are working together over the next year to formulate teacher evaluation criteria. Even if we somehow can become the first state in the nation to overcome all of the other statistical volatility and operational unreliability issues associated with tying teacher evaluations to numerical student learning outcomes, will we do what’s right and ensure that the student achievement component of teacher evaluations is at most 10% to 15%? If we do, will the federal government even let us? If we don’t, how long until the first due process lawsuit is filed?

[UPDATE: Be sure to see the 4 scenarios below. Which seems most fair to you?]