Will schools acknowledge where and how they failed during the pandemic?

In an article about the Negro Leagues and Major League Baseball, Howard Bryant said:

Baseball should have taken the honest road, which would be to carry its stain and leave the tattered, piecemeal records of the various Negro Leagues as a historical reminder of its own destructiveness. Baseball did not do that — not because it was so important to give Josh Gibson a posthumous batting title but because like most of white, mainstream society, it does not want to carry its share of the responsibility for the condition it created.

While baseball has taken what it considers to be a step toward reparation, it has taken another away from accountability. Part of the strength of an institution is in its acknowledgment of where it has failed, and who suffered because of that failure.

This idea pertains to schools and the pandemic as well. The first months of 2020 were an emergency that caught most school systems and their leaders off guard. In the summer months of 2020 (here in the United States), school leaders had an opportunity to learn from the mistakes that they made in the spring and do things differently in the fall. While some school administrators used that window of opportunity, others did not and their schools and districts have repeated many of the mistakes they made in the spring again this fall. This winter break has given us all yet another chance to rethink what our schools are doing and make significant changes for January and beyond. How many school systems actually did so?

It’s one thing to make new mistakes. It’s another to keep making the same ones again and again. How many school leaders will look inward and, as Bryant said, ‘carry [their] share of the responsibility for the condition(s) [they] created?’ How many students, families, and educators have we failed as school systems, and will we ever hold ourselves accountable? If ‘part of the strength of an institution is in its acknowledgment of where it has failed, and who suffered because of that failure,’ how many school organizations are actively examining and owning their current failures in order to not repeat them over and over again?

Is your school system acknowledging where it has failed and who has suffered as a result? Are your school leaders making new mistakes or repeating the same ones again and again? Why?

Command and control versus key principles and autonomy

In Leadership and the New Science, Margaret Wheatley noted:

Scientists now describe how order and form are created not by complex controls, but by the presence of a few guiding formulas or principles repeating back on themselves through the exercise of individual freedom. The survival and growth of systems that range in size from large ecosystems down to the smallest microbial colonies are sustained by a few key principles that express the system’s overall identity combined with high levels of autonomy for individuals within that system. (p. 13)

In the rush to serve children and families and create new modalities of learning and teaching during the coronavirus pandemic, I wonder how many school systems gravitated toward greater ‘command and control’ and how many embraced ‘a few key principles … with high levels of autonomy for individuals within that system.’ I also wonder about the organizational contexts and leadership mindsets that fostered one or the other, as well as which approach worked better…

We know from research that students can have more robust learning experiences when what happens in school is relevant to their lives, helps them connect to a larger purpose, and is grounded in a sense of belonging. This means that the system must be responsive to their goals, interests, and sense of self and community. If young people are not at the center of conversations about what constitutes success, we will not get school right.

We often show students that we don’t see them as experts about their own lives and astute observers of their surroundings. This is especially true when the conversation shifts to groups of students who have been marginalized by race, culture, language, family income, or disability. Insidious cultural beliefs seep in, and the “real experts” take over to tell students what is possible for their futures and then design policies, curricula, and professional development without their input.

I have had the humbling opportunity of deeply listening to students. What stands out is that when young people are able to take agency, feel affirmed (their lived experiences, families, histories, cultures, communities), and share power with adults, they thrive. My biggest fear is that we adults don’t actually want to hear what young people have to say. Taking them seriously disrupts our comfort and expertise – and threatens our sense of authority.

Every day, every year, we waste the potential of millions of students 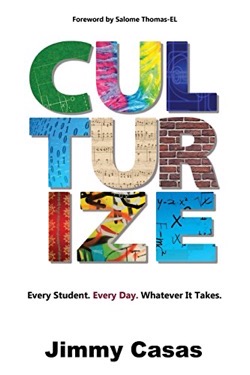 a system which assured [students] of success only to find out [that] meant success for those who were willing to play the game of school and who were compliant. . . . students attended school in body but were absent in mind and in spirit. In other words, they had checked out and were just hanging around the prison yard of lost potential waiting to escape. (Culturize, p. 24)

Every day, all across the nation, we ignore, waste, and destroy enormous amounts of human potential because we take the vast diversity of humanity that is our students and shoehorn it into a ‘one size fits all’ model. Their failures are ours. The fault lies with us, not with them.

What are we doing to activate our students’ latent potential beyond the narrowly-proscribed ways that schools currently choose to recognize? What is our moral urgency for doing so? What are some concrete actions that we can take immediately and in the future to liberate our students from the oppressive structures of teaching and schooling that currently restrain their hopes and possibilities?

Mandates that are bad for kids

As a former school superintendent . . . . I felt perpetually conflicted about being forced to implement mandates that were, frankly, bad for kids. The irony is how often the very politicians who denounce bullying use their power to beat adults into submission with their ill-conceived laws. In education, they do this through threats of financial penalty against districts that dare disobey them, by threatening the professional licensure of educators who don’t do as they are told, and/or through character assassination of those who dare question them.