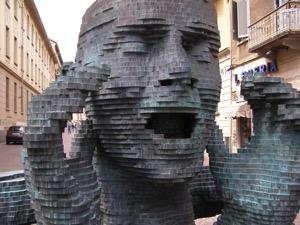 Jamieson and Cappella’s book is the first empirical study into how echo chambers function. In their analysis, echo chambers work by systematically alienating their members from all outside epistemic sources. Their research centres on Rush Limbaugh, a wildly successful conservative firebrand in the United States, along with Fox News and related media. Limbaugh uses methods to actively transfigure whom his listeners trust. His constant attacks on the ‘mainstream media’ are attempts to discredit all other sources of knowledge. He systematically undermines the integrity of anybody who expresses any kind of contrary view. And outsiders are not simply mistaken – they are malicious, manipulative and actively working to destroy Limbaugh and his followers. The resulting worldview is one of deeply opposed force, an all-or-nothing war between good and evil. Anybody who isn’t a fellow Limbaugh follower is clearly opposed to the side of right, and therefore utterly untrustworthy.

The result is a rather striking parallel to the techniques of emotional isolation typically practised in cult indoctrination. According to mental-health specialists in cult recovery, including Margaret Singer, Michael Langone and Robert Lifton, cult indoctrination involves new cult members being brought to distrust all non-cult members. This provides a social buffer against any attempts to extract the indoctrinated person from the cult.

The echo chamber doesn’t need any bad connectivity to function. Limbaugh’s followers have full access to outside sources of information. According to Jamieson and Cappella’s data, Limbaugh’s followers regularly read – but do not accept – mainstream and liberal news sources. They are isolated, not by selective exposure, but by changes in who they accept as authorities, experts and trusted sources. They hear, but dismiss, outside voices. Their worldview can survive exposure to those outside voices because their belief system has prepared them for such intellectual onslaught.

In fact, exposure to contrary views could actually reinforce their views. Limbaugh might offer his followers a conspiracy theory: anybody who criticises him is doing it at the behest of a secret cabal of evil elites, which has already seized control of the mainstream media. His followers are now protected against simple exposure to contrary evidence. In fact, the more they find that the mainstream media calls out Limbaugh for inaccuracy, the more Limbaugh’s predictions will be confirmed. Perversely, exposure to outsiders with contrary views can thus increase echo-chamber members’ confidence in their insider sources, and hence their attachment to their worldview. The philosopher Endre Begby calls this effect ‘evidential pre-emption’. What’s happening is a kind of intellectual judo, in which the power and enthusiasm of contrary voices are turned against those contrary voices through a carefully rigged internal structure of belief.

Read the whole thing and recognize that this pertains to numerous online communities, not just those on the political right. The psychology of all of this is pretty concerning. And for those of us who are searching for solutions, the one offered – to completely reboot your social circle – is incredibly unlikely for most people. No easy answers here, but plenty of room for concern…