East Campus: Uncovering the brilliance in every student

High school student Jeff Bliss famously said in 2013, “If you would just get up and teach them instead of handing them a freakin’ packet, yo. It’s kids in here that don’t learn like that. They need to learn face to face.” Unfortunately, too many alternative high schools are just about worksheet packets and self-paced online courses. East Campus in Muscatine, Iowa takes a different approach, one that is paying enormous dividends in terms of student engagement, academic success, and high school completion. 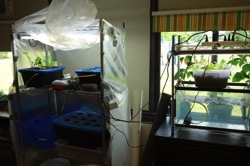 East Campus has a strong emphasis on hands-on academic activity. For example, students learn about metal absorption, evolution of plant species, and trait adaptation in science by engaging in real-world hydroponics and phytoremediation projects. They partner with the University of Iowa and Muscatine Power & Water to do this work, learning about cell biology, ions, and molecular polarity along the way. Similarly, they’re learning about urban renewal and the environmental impacts of human behaviors through the lens of bicycling, applying their English / Language Arts skills as they evaluate resources, write grant proposals, utilize social media, and engage in marketing techniques to advocate for more bicycle-friendly areas in their community.

Students also are investigating molecular structures by testing sugar substitutes and seeing which configurations taste better; the end goal is to create a book or video that places a culinary lens on the subject of chemistry. They’re working with a nonprofit that makes hand-powered bicycles for people who have lost the use of their legs, analyzing different countries and cultures to determine where the need for such transportation is greatest. Most students are learning to code, and nearly all of them are incredibly active in their community’s Blue Zones initiative, helping the food insecure grow healthy vegetables and making commercials that promote healthy behaviors. They work with Monsanto to understand the seed production process. They make documentaries with local survivors of heart disease for the American Heart Association’s Go Red for Women campaign. They’re using scrum boards and other project management techniques. Their video production work is so fantastic that they participate in national media conferences and get asked by out-of-state businesses to make videos and commercials. And so on…

The work that East Campus students do isn’t sitting at a desk regurgitating facts from a textbook. They’re not just answering a few short essay questions based on a teacher lecture days before. Instead, they’re engaged in challenging, real world work. Their assessment is in the quality of what they do, not just recalling minutiae that can be found in five seconds with a smartphone voice command. Are your high school students doing this kind of complex, authentic work on a regular basis? Are your local youth making a positive, meaningful impact on their community and the world around them?

In his most recent TED talk, Sir Ken Robinson notes that our best alternative education programs are “very personalized” and often “involve students outside school as well as inside school. And all the evidence from around the world is – if we all did that – there’d be no need for the alternative.” East Campus proves that every day, reclaiming students’ brilliance that too often gets lost in our more traditional systems.