Dear Governor Branstad, we need both 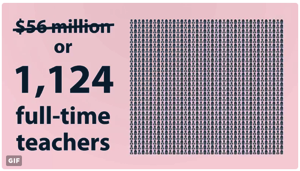 “We gave all this across-the-board money with no accountability and Iowa kind of stagnated while other states put a focus on things that increase their standards that improve their student achievement.” [Governor Branstad] has defended his veto of $55.7 million in one-time funds by saying the solution to improving student performance is not to simply throw money at the problem. He doubled down on that Monday, saying he prefers the state make more targeted investments in high-priority education programs rather than making a blanket allocation of dollars.

Hey, I know you’re barely getting by and don’t have enough money to live or eat but you’ve been living and eating for years with no appreciable improvement in your life situation. What you really need is some job training. So we’re going to cut back even further on your food and housing assistance in favor of some targeted funding for job training.

Governor Branstad is asking Iowa schools to choose between subsistence or improvement investments when, of course, they need both. Easily understood, but apparently not easily enacted.

How does losing 1,100 teaching positions make Iowa schools ‘best in America’ again? And when did basic, essential funding of schools become ’throwing money’ at them?