A few folks know that I was one of the three finalists to be the next Director of the Iowa Department of Education. It was an interesting process (e.g., just two 30-minute interviews is apparently all that it takes) but I did feel that I was able to present my best self. I discussed how we won’t see desired changes in student learning outcomes until we change what students experience in their schools on a day-to-day basis. I talked about how investment in deeper learning also is workforce development. I shared some big ideas about where I thought Iowa education could / should go. I highlighted my work with 130+ Iowa schools and other organizations and my strong networks across the state and planet. And so on. Ultimately they decided on the in-house candidate, former Deputy Director Ryan Wise, who is sharp, talented, and knows how both the Department and the politics work. I think Ryan was an excellent choice and wish him all the best in his new role.

One of the obligatory questions in the interview process is What will you do if you disagree with the Governor? After last week’s veto of school funding by Governor Terry Branstad, I’m really happy that I’m not the one who has to stand in front of educators over the next few months and defend that decision. I blogged in March that it was really tough to feel positive about education politics in Iowa this year and I was proven right. The Governor waited until just before the July 4 vacation weekend to make the announcement that 1) he was willing to increase school funding next year at only 1.25%, a rate that comes nowhere near inflation, and 2) he wasn’t willing to sign off on $55+ million in one-time funding that at least would have stemmed some of the losses that schools will face next year. School districts estimate that this fall they will have over 1,000 teaching positions unfilled or terminated across the state as they struggle to pay the bills. Every major newspaper and educational organization has come out in opposition to the underfunding of schools by the legislature and Governor, noting also that our policymakers were a year and a half overdue with their legal obligation to set school funding. Adding potential insult to injury, the Governor’s first press conference after his school funding veto began with a 5-minute shout-out to the tourism industry and a claim that the school start date ‘compromise’ legislation that was opposed by essentially every school district in Iowa was a ‘win-win.’

I think that there are some big questions that we have to ask as a state after the Governor’s school funding veto. Here are a few that currently are on my mind…

1. Budgets reflect policy priorities. How big a priority are our public schools? 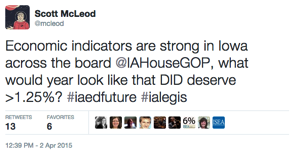 Belying the rhetoric about wanting ‘world class schools,’ over the past few years we have witnessed Iowa policymakers’ willingness to decrease the money allocated to our schools and universities, despite a strong state economy and full reserves. Iowa’s spending per pupil is well below the national average and the percentage of the overall state budget allocated to education is several percentage points lower than it was just a few years ago, causing the Iowa State Education Association to say, “We haven’t seen this dramatic a lack of funding ever.” This year we were willing to fund only a 1.25% increase for schools, despite net tax receipts this year that were 6% higher than last and projected 6% growth in revenue for next year. Yes, some of our districts have teacher leadership monies in addition to the 1.25% allowable growth funding. But those teacher leadership funds were supposed to supplement, not supplant, the dollars needed to keep school buildings running and only a few teachers are benefiting from them. So while education continues to be the biggest part of the state budget, it seems that all of the funding trends are negative, not positive. We are falling further behind rather than catching up. Are we only willing to fund schools’ basic operations at below inflationary rates, even when our revenues and economy are strong?

2. Are we willing to trade tax cuts for education (and other) funding?

Some of the monies that could go to schools instead seem to be going to tax cuts. For instance, next year our recently-passed commercial property tax cuts will remove an estimated $278 million from the state budget. Tens of millions of dollars are going to companies like Iowa Fertilizer (a subsidiary of Orascom, the CEO of which is billionaire Nassef Sawiris, the wealthiest man in Egypt), which just requested additional tax breaks despite already receiving hundreds of millions of dollars from local, state, and other sources. The Iowa legislature is talking about trying to reduce income tax revenue too. In response to schools’ requests for more funds, House Speaker Kraig Paulsen said, “This is a mathematical problem: The state only has so much money.” But we’re giving away revenue and then saying that we don’t have the funds for our schoolchildren. It seems that the tax cut monies alone would have funded increases in education and other basic services several times over. I’m not anti-business by any means and am in full support of job creation initiatives but our overall business tax levels already are below the national average. Maybe we could do less of this? Or is Iowa trying to become a low tax, low revenue, low education state like Kansas or Louisiana?

3. Do we have any other options besides trying to cover?

Iowa has the top high school graduation rate in the country. We have the third-highest average ACT score of states that test at least half of their graduates. These, personnel sharing arrangements, and other successes are a testament to the efforts of our educators, school systems, and communities to somehow make it all work. But our ability to make do with less makes it easier for Iowa policymakers to continue to starve our schools. At some point the stresses on the system will cause it to break but for now they can continue to push on the edges, knowing that our schools’ eventual failure will occur during someone else’s political cycle. I don’t know what the answer is, particularly since educators in Iowa can’t strike and don’t want to put policy interests above the day-to-day needs of their students. What options do we have besides trying to continue to cover?

4. Are our representatives actually representing our wishes?

One option we all have in our democracy, of course, is voting and participating in the political process. Although social media was a big part of this year’s school funding dialogue, slacktivism can be a fairly easy trap to fall into. Tweets and pins and blog posts and Facebook ‘likes’ are fairly easy to ignore, particularly by policymakers whom are less technology-knowledgeable. We will never know how much pressure to adequately fund schools the Iowa legislators and Governor received from parents, community members, and educators via phone calls, letters, in-person visits, etc. We do know that those requests were unsuccessful.

This year I’ve wondered about the involvement (or lack thereof) of the educators and communities represented by those policymakers who voted against more than minimal school funding. It’s difficult to believe that those families and teachers weren’t concerned about the lack of funds that would be going to their local schools and the impacts on their classrooms and educators. Regardless, their concerns (if any) weren’t powerful enough to dissuade their local representatives from the course that they took.

Battles over school funding will continue. If we like the current path that we’re on, so be it, but if we want different decision-making by those whom we elect to represent us, we must make our voices louder and our votes count. Midwest educators are doubly nice, both because of the culture of where we live and because of our profession. We trust our representatives to represent us and then ever-so-quietly express our concerns when they don’t. We rely on the small handful of statewide organizations to speak for us rather than recognizing that our own individual voices are important (other than Patrick Kearney from Johnston, how many educators were writing regularly and publicly, expressing their concerns in formats longer than 140 characters?). Roark Horn, Executive Director of the School Administrators of Iowa, reminded us this week of the difference between reacting and responding, noting that “it is natural to want to react with the anger and frustration that we feel” as classroom teachers and school leaders. Roark is correct about our tone but I will also note that educators’ current policy advocacy is not working. Politics often requires a bolder voice than we educators are accustomed to exercising. Dr. Martin Luther King, Jr., said, “Our lives begin to end the day we become silent about things that matter.” At the recent ISTE conference, Pernille Ripp reminded us that we can’t stop fighting for what is right for kids. Will Iowa educators shrug their shoulders and roll over (yet again) or will they do what’s necessary to effectuate the changes that they’d like to see? Maybe it’s time to ask every educator in Iowa to pledge to vote in the next election? Will Iowans hold their representatives accountable next election year for their school funding decisions over the past few years?

5. What behavioral expectations should we have for our representatives?

It was a frustrating year on all sides of the school funding debate. But that doesn’t mean that we get a free pass on how we treat each other, even in the often rough-and-tumble, bare knuckles environment that is politics. Should we expect rooms for public hearings to actually be big enough to hold the public? Should we expect our legislators to actually listen (and maybe respond) to the concerns that we express? Should we expect better than this from our representatives? Or this? Or this?

6. What messages are we sending our young people?

Earlier this week Governor Branstad said, “The only way that we’re going to be able to keep our smaller school districts alive and successful is if we’re able to attract young families that have children.” and “Every child in Iowa [should] have the opportunity to get a quality education.” It’s hard to see how our recent educational funding decisions accomplish this as schools across the state now have to fire teachers or leave positions unfulfilled.

College graduates continue to leave our state, contributing to Iowa’s ‘brain drain’ (which was noted at least ten years ago). The Governor rightfully notes that we need to attract young families to our small towns. What messages do our disinvestments in schools send them as they consider where they want to live and raise their children?

7. What does our new Director think? 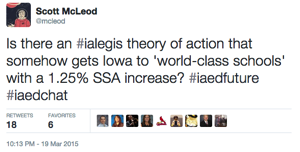 The Director of the Iowa Department of Education is a political appointee who serves at the discretion of the Governor. But hopefully he or she also is an advocate for children and teachers and schools, not just a puppet or mouthpiece. Hopefully he or she is a fierce proponent of schools getting the resources and autonomy that they need to be successful. So with that in mind, does Ryan Wise agree with the veto? (will Mackenzie Ryan or someone else ask him on record?)

As always, feedback and pushback are welcome. Your thoughts?