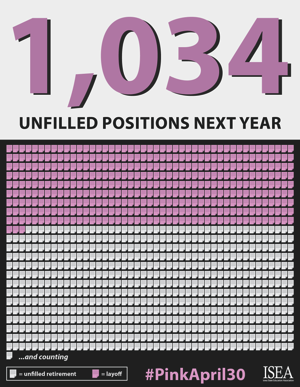 I had a Republican legislator [in Iowa] reference me saying that I was “wrong” in my writing on school funding. Yet, after saying I was “wrong” he admitted that Republican legislators are using large amounts of tax dollars (80% of next year’s state revenues) for corporate property tax relief. He wrote that the state simply couldn’t afford more than a 1.25% increase in K-12 school funding, yet state budget experts say that we have $717 million in state reserves and don’t even need to touch our state surplus in order to support education spending and still balance the budget. He said he didn’t have any problems with teachers, but it sure seemed crazy that those darned teacher unions were asking for 4% salary increases (although Iowa teachers make at least $5,000 less than the national average). He admitted that the 1.25% growth included money from the governor’s Teacher Leadership Compensation plan that was never intended to be included in SSA (what used to be allowable growth). I was perplexed as to what I have said that is wrong. I’m not even saying Republican legislators are “wrong”, I’m simply saying that I disagree with their priorities. I disagree that losing over 1,000 teaching positions in Iowa make Iowa schools better. I disagree that our money is better spent on corporate tax loop holes and corporate property tax relief than on education.