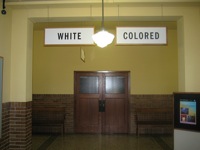 When African-American students from impoverished families are concentrated together in racially isolated schools, in racially isolated neighborhoods, exposed only to other students who also come from low-income, crime-ridden neighborhoods and from homes where parents have low educational levels themselves, the obstacles to these students’ success are most often overwhelming. In racially isolated schools with concentrations of children from low-income families, students have no models of higher academic achievement, teachers must pitch instruction to a lower academic average, more time is spent on discipline and less on instruction, and the curriculum is disrupted by continual movement in and out of classrooms by children whose housing is unstable.

Social science research for a half century has documented the benefits of racial integration for black student achievement, with no corresponding harm to whites. When low income black students attend integrated schools that are mostly populated by middle class white students, achievement improves and the test score gap narrows. By offering only a “diversity” rationale for racial integration, [United States Department of Education] Secretary [Arne] Duncan indicated that he is either unfamiliar with this research or chooses to ignore it.

[Duncan’s] response was especially troubling because the segregation of black students is increasing, not decreasing.

Even better, here in Iowa – at least as long as we don’t talk about or consider the resultant resegregationist effects – we’re supposedly in favor of school choice!