Education, the Internet, and the ignorance of policymakers 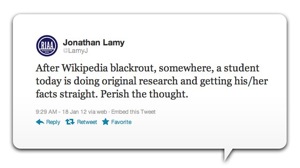 Yesterday, along with thousands of other web sites, Dangerously Irrelevant shut down for the day to protest two bills, SOPA (House) and PIPA (Senate). I don’t think my little blackout had any major influence, of course, but I wanted to express my solidarity with the larger concerns. For those of you who are unfamiliar with the issues, Congress is debating right now whether the Internet in America and elsewhere should be hostage to the demands of a few private companies. If SOPA, PIPA, and similar laws are passed, the Web could look like this for all of us.

Unfortunately, legislators are making policy out of ignorance. Indeed, they’re even joking about it. This has to stop. The Internet is too valuable a resource to legislate stupidly or to hand over to the demands of corporations. As Josh Kopstein stated, it’s no longer okay for Congress to not know how the Internet works.

issues of copyright law, political control, privacy, and child protection are exciting governments around the world about stepping in to regulate cyberspace. While this may solve problems in the short-term, these regulations will be blunt, hasty, and hard to undo. And they will run the risk of extinguishing the Internet’s connective power before we have the chance to realize it.

There are real dangers here. I encourage every one of you who lives in the United States to please contact your legislators to let them know of your opposition to SOPA and PIPA.

This applies to education too!

Of course all of this is true for education lawmaking too. We have a number of different education bills, particularly at the state level, that are being driven by corporate interests instead of pedagogical appropriateness. Read a bit about the American Legislative Exchange Council (ALEC), for example (thank you, Pam Moran, for cluing me in). While you’re at it, check out its list of alumni politicians. I think all of that is pretty scary. How about you?

Yesterday Senator Marco Rubio, the co-sponsor of PIPA, dropped his support for his own bill, essentially admitting that he didn’t understand the issues clearly when he introduced the legislation. I don’t know if he was as embarrassed as he should have been, but his turnaround highlights the fact that our lawmakers are too easily snowed by corporations and others who have interests that often run counter to the good of the people or our schools. This is true whether we’re talking about corporate advocacy for self-advantaging legislation or high-profile, extremely political, special interest groups that pressure state-level policymakers to align themselves with supposedly-national movements.

My home state of Iowa is a case in point. It is quite clear that some of the educational initiatives recently put forth by our Governor, Terry Branstad, have political origins outside of the state. There is a tremendous press from outside groups to get certain legislative items passed, regardless of their known harm to children or educators. This is leading to extremely disconcerting disconnects, including the fact that Governor Branstad recognizes that certain students need less time to learn required material (thus his proposal for competency-based, rather than age- or grade-based, progression) but doesn’t simultaneously recognize that other students need more time to learn required material (thus his proposal for 3rd grade retention). Genuine concerns about his inability to recognize that there are two sides to the learning time coin are deflected with accusations that critics are against ‘high standards’ and ‘high expectations’ and ‘accountability.’

We have to do a better job of educating our policymakers about important issues related to the Internet and education and other critical areas of concern. We also must do a much better job of holding them accountable for educating themselves. Otherwise their lack of knowledge will continue to manifest itself in legislation that is potentially harmful and dangerous to us all.

Image credit: RIAA reminds us why we hate them with obnoxious smartass tweet