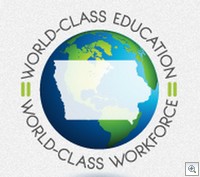 Gov. Terry Branstad and Lt. Governor Kim Reynolds will make draft recommendations for how to give all Iowa students a world-class education by Oct. 1.

The draft recommendations will focus on the three key areas addressed at the Iowa Education Summit in late July: (1) getting a great teacher in every classroom, a great principal in every building, and providing the support they need to do their jobs well; (2) raising academic standards and putting in place strong matching assessments; and (3) innovation that boosts learning.

To which I commented:

‘Great’ in the sense of quality (i.e., “really good” or perhaps “better than what we have now”) or ‘great’ in the sense of ‘exceptional’ (rare, unique)? Because the former is much more achievable than the latter. ‘Exceptional’ is exceptional for a reason; this is not Lake Wobegon (where every educator is above average). In every profession, there will be a continuum and there’s a natural curve under which only a certain percentage can ever be deemed to be ‘great.’ Unless we are going to have fewer educators overall (allowing us to dip less deep into the available talent pool), we are going to have a hard time meeting this goal without focusing heavily on talent recruitment, preservice and inservice training, and talent induction/support/retention. Education traditionally has a very poor record of doing these things because they’re quite difficult, time-consuming, and expensive.

I’ll also note that many current educators are going to be offended that the Governor doesn’t think they’re already ‘great.’ Deming noted that nearly all of the problems that we have with individuals is due to the systems in which they’re embedded. We’re going to have to decide if we are just going to focus on educators (and maybe colleges of education), which will be perceived by many as blaming and shaming, or we also going to recognize (and emphasize) the far greater (and thorny) problem of the systems in which they’re embedded. I hope the latter. Question: how do we know we don’t already have ‘great’ educators who are simply trapped in dysfunctional systems?

We’re also going to have to decide just how much we care that our state ranking has declined on national tests that emphasize low-level factual recall and procedural knowledge. Personally, I’m much less concerned by this than I am the fact that the overwhelming majority of Iowa schools – even our supposedly best ones – still aren’t adequately focusing on the higher-order thinking skills, technological competencies, intra- and interpersonal competencies, and other skill sets that will make our graduates truly ‘globally competitive.’

Final thought: If our proposed reforms don’t dramatically change what kids do on a day-to-day basis in the classroom, they’re going to be political theater rather than substantive change initiatives. So we need to think and talk robustly about what we want our kids to be DOING, not just what we want them to be learning. In other words, the HOW is just as important as the WHAT.

Please come join the conversation and take the opportunity to chime in BEFORE the blueprint comes out. The Iowa Department of Education is a little slow when it comes to approving comments but yours should show up eventually!