How To Teach For Jobs That Don’t Exist [guest post]

In my short time as an educator, I have already suffered through enough acronyms, initiatives, and memes to give me a dull sense of despondence not unlike some of the more deafeningly quiet scenes from Kubrick’s 2001: A Space Odyssey. However, I do not want it to be this way. 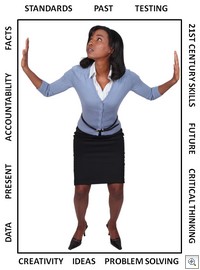 I was told to teach for the jobs that have not even been imagined yet. I was told to teach for the student who will switch professions more times than my pregnant wife changes sleeping positions. As per usual, the question of how to do this was left largely unanswered. There was, however, a very inspirational YouTube video with a lot of appearing and disappearing buzz words.

So, I stand here before you, asking the question to myself and all other practicing teachers: How does the glut-of-information age affect how we run our schools? How do we realize that those students who look bored, might be so simply because they’re learning more outside of school rather than in it? How do you deal with the fact that the ability levels in your classes are going to become even more diverse?

This is really the heart of the “21st Century Skills” movement. After a walk-in-the-woods moment, I came up with these two solutions:

A. Points and grades are flotsam and nothing more. They are the burning wreckage of an over-used and over-assumed system of Pavlovian control that has created our school system’s stigma. This is a stigma so prevalent that it is often assumed: just imagine the comic portrayal of school in the Simpson’s, or think back to how many negative words are often associated with the start of school each Fall.

As a group of teachers, my building has decided to do something different. We’ve adopted the premise that learning matters. Grades — for now — are forced on us, so we’re going to milk that system for every ounce of learning we can get out of it. We’ve stopped grading practice (i.e. Homework), we’ve stopped using summative assessments as executioner’s axes, and most beautifully, kids have started to ask really fantastic questions. We call it standards-based grading, but the word “standards” is a misnomer: we create the standards, and use them as anchors for free-floating classrooms.

I am now free to model for them what a life of learning looks like. I am now free to guide them through the often disastrous process of really getting something. What’s most euphoric, is that I can now take their questions and design instruction that may never happen again simply because I will never have the same students twice.

I’m still not sure how I’m supposed to teach for occupations that don’t exist, but I know this feels like a good start.

Shawn Cornally teaches Physics, Calculus, & Computer Programming in Eastern Iowa. He blogs at Think Thank Thunk. He is petrified of being irrelevant and ineffective in the classroom.