Are we edubloggers too harsh on our kids’ teachers?

Will Richardson and Alec Couros are frustrated with their kids’ teachers. Lee Kolbert pushed back. Gary Stager chimed in too, as did many others in the various comment areas. 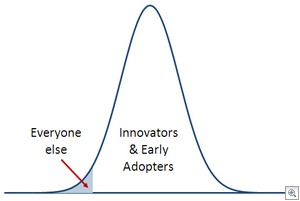 Many of us edubloggers read, watch, and/or listen to cutting-edge educational practice EVERY SINGLE DAY. We see and interact with teachers who live in the nose-bleeding margin of the stratosphere when it comes to technology integration and instruction for higher-order thinking. We know of administrators who are trying hard to create whole new paradigms of schooling. Over time, we begin to normalize these actions and internalize them as ‘best’ or ‘desired’ practice.

Given that there is an innovation adoption curve, is it fair to expect our local educators to measure up? Can they ever do so? Are we edubloggers (myself included) too harsh on our kids’ teachers?