Should we absolve Diane Ravitch of her earlier decisions?

[I’m going to state up front that I’m just thinking out loud here. Some of you are not going to like that I even dared to ask this.] 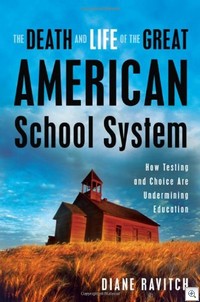 Diane Ravitch: author of The Language Police: How Pressure Groups Restrict What Students Learn, by far the sharpest analysis of P-12 textbooks and curricula that I’ve ever read.

Diane Ravitch: current critic of the No Child Left Behind Act, standardized testing, charter schools, and market-based school reform (in her most recent book, The Death and Life of the Great American School System: How Testing and Choice Are Undermining Education).

With publication of her new book, many are hailing Dr. Ravitch as one of public education’s great heroes and advocates. I confess that I’m struggling with this. She’s done nearly a complete 180, reversing her position on numerous policy fronts. What she now condemns are issues for which she not only advocated but helped implement during her tenure at the United States Department of Education. And now she thinks they’re all bad.

Should she get a free pass? Should past critics absolve her of her earlier decision-making?

After all, many believe that, thanks to her and others, the negative impacts on students and schools have been substantial, resulting in significant long-term harm to our educational system and society.

After all, it wasn’t like the reasons that she cites now for her reversal weren’t raised as red flags back then. Take a look at the past writings of Alfie Kohn, Susan Ohanian, and others. All of the criticisms that she raises now were cited long ago, at the time of her decision-making.

What should we do with Diane Ravitch? Welcome her back into the fold of public education advocates? Do we just say, “Oh, hey, glad you now see the light. Thanks for joining us!” Or do we continue to condemn her for past actions, believing that current contrition is not enough?

Your thoughts on this?