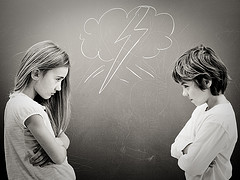 Yesterday’s article in the Cleveland Plain Dealer was titled Teachers’ Seniority Rights Under Assault in Cleveland, Across Nation. The article highlights the growing battle over seniority provisions in collective bargaining agreements that favor more experienced teachers over newer ones, regardless of educator quality.

Cleveland Teachers Union leaders say that they “fear giving too much authority to principals who might make unjust, arbitrary decisions, or tying their futures to test scores that urban districts struggle to raise.”

Similarly, Thomas Ash at the Buckeye Association of School Administrators believes that standardized tests and “potentially subjective appraisals” are not reliable measures of performance. Instead, he favors traditional teacher seniority provisions because they’re “a nice, objective measure.”

Really? There’s absolutely no way that we as educators can come up with better indicators of teacher quality than seniority? We can’t use either “objective” student achievement data OR “subjective” appraisals by educators (or a blend of these plus maybe some other measures too)? What else is there? Is the intersection of no student outcome data AND no evaluative appraisals an empty set?

I don’t think I’m willing to allow P-12 educators to essentially say they’re unevaluable, and I don’t think the American public is either. It’s this kind of thinking and verbiage that gets in the way of needed progress and essentially cements the reputation of American schools as hidebound institutions incapable of making necessary change.

Stick a fork in the system; yet another sign that it’s done?