[This is Post 1 for my guest blogging stint at The Des Moines Register.]

Archimedes said “Give me a lever long enough and I can move the world.” This week I will be blogging about 5 key levers that I think are necessary to move Iowa schools forward and help our graduates survive and thrive in this new digital, global age in which we now live. Today I am going to emphasize the work that is being done by the Iowa Department of Education and others regarding 21st century curricula.

Those of you who regularly follow Linda Fandel’s two blogs here at The Des Moines Register know that last year Iowa became the seventh state to join the Partnership for 21st Century Skills, an initiative designed to “position 21st century skills at the center of US K-12 education by building collaborative partnerships among education, business, community and government leaders.” These so-called 21st century skills are those needed by Iowa graduates to be competitive in a global information economy: 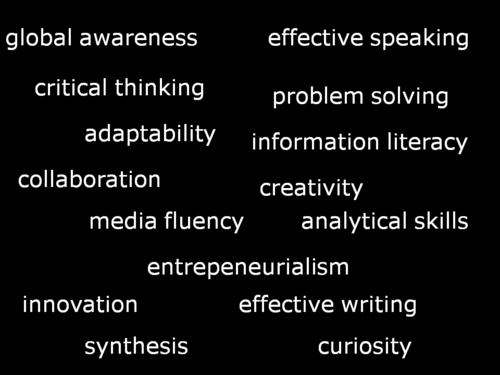 Why are these skills so important? Because the rise of digital information and communication technologies such as e-mail, instant messaging, videoconferencing, and the Internet have virtually eliminated the workplace barriers of geography and time. It is now about as easy to work with people halfway across the globe as it is with folks halfway across town. As a result, information, money, and ideas criss-cross the globe at dizzying speeds and work moves to the location of lowest cost or greatest expertise. This puts an extraordinary amount of pressure on the Western wage premium: why pay an American worker such a high salary when someone in another country will do the same work for less?

So we have company after company, task force after task force, and commission after commission telling us that the skills listed above are important because they’re the ones that enable American workers and companies to differentiate themselves from others across the globe. They’re the skills that justify higher American wages and benefits. They’re the skills that drive American creativity and innovation. Economists have shown quite clearly that the only growth in the American workforce is occurring in “creative class” professions that involve critical thinking, complex communication, collaborative problem-solving, and other more-abstract skills: 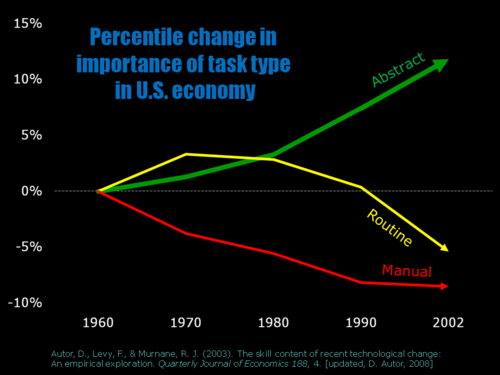 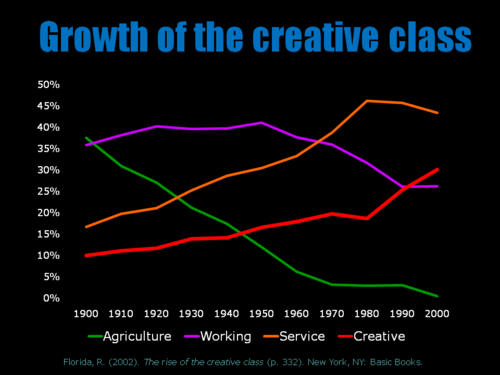 If you turn that second line chart into a stacked bar chart, it looks like this: 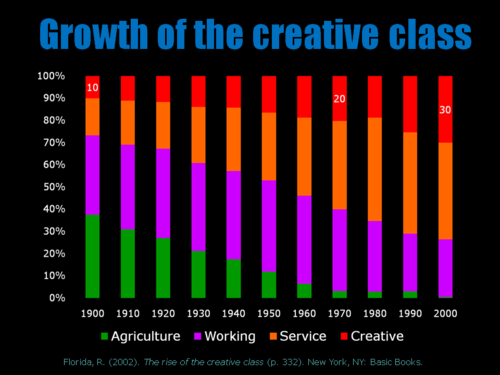 If we look at just the two ends of this last chart, we see the fundamental dilemma. Our K-12 schools, which were created for an era when 3/4 of American workers were involved in agricultural or manual labor jobs, are now expected to function in an environment in which about 3/4 of our workers are now in more cognitively complex service or creative professions: 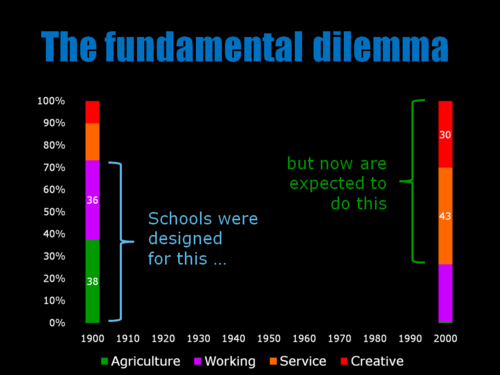 But we hear from American corporations that they’re having great difficulty finding workers who possess the skills needed to do these jobs, which is why they’re either hiring people from other countries or taking jobs overseas.

If Americans wish to retain their economic preeminence, our schools have to change. The rest of the world is catching up to us and creative, innovative, problem-solving (which requires deep conceptual, rather than shallow procedural, understanding) is American students’ weakest area on international assessments. If Iowa workers are to be globally competitive, they will need schools to help them acquire a different set of skills than they have needed in the past.

Is the Iowa education system up to the challenge? Only time will tell. But a critical step to making this transition is the creation of curricula that emphasize student acquisition of 21st century skills rather than regurgitation of discrete facts and low-level procedural knowledge. This will be an extremely difficult change for Iowa schools to make. We all have mental models, primarily informed by our own school experiences, of what school should look and be like. We cannot hang on to those models and expect our graduates to be successful in a vastly different economic climate. We cannot simply sprinkle 21st century skills like fairy dust on top of what we’re already doing. Instead, we must fundamentally realign the curricula and instruction that occurs within our schools in order to produce the workers and citizens that we need.

The Iowa Core Curriculum, particularly the aspects related to 21st century skills, is intended to get us where we need to go. Iowa citizens need to educate themselves about the Core and start asking tough questions about vision, development, implementation, funding, training, and support of their legislators, local school board members, and the Department of Education. Inaction is not an option, nor is tweaking the status quo, as both are losing strategies in a rapidly-changing digital, global economy.

Scott McLeod, J.D., Ph.D., is an Associate Professor and coordinator of the Educational Administration program at Iowa State University. He also is Director of the UCEA Center for the Advanced Study of Technology Leadership in Education (CASTLE). He blogs regularly at www.technologyleadership.org.