Over at the On Our Minds @ Scholastic blog, Tyler Reed is pondering the recent announcement by the Lamar (MS) County School District that it will prohibit teachers from communicating with students via social networking tools such as Facebook or MySpace.

The question in my mind is:

Why treat social networking spaces differently than any other means of teacher communication?

The issue is actual inappropriate teacher communication and/or behavior (which I’m guessing is already covered by board policy), not the method by which teachers communicate with students. A prohibition on use of social networking tools does absolutely nothing to prevent inappropriate teacher communication with students via other channels. So the district either needs to implement similar policies for telephones, snail mail, written notes, instant messaging, cell phone text messaging, e-mail, online video, blogs, wikis, podcasts, and the like or it needs to justify why social networking sites are so evil compared to all the other ways that teachers and students can communicate. 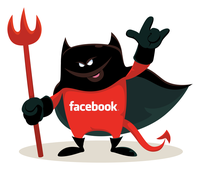 If the district is going to ban social networking and other 21st century communication tools, it’s going to be awfully busy making policies since new tools pop up every week. Also, one of the first things you learn in law school is that you should never make a rule you can’t enforce. How on earth would the district ever monitor this?

Facebook and MySpace are the 5th and 7th most popular sites on the Internet, respectively. Instead of exploring how teachers, students, and parents can use these sites productively, the district instead has turned into the social networking Nazi: no Facebook for you! Just for kicks, I took a look at the performance of the Lamar County schools. My suggestion for the school board is that perhaps its time and energy would be better spent raising the low academic performance of the students in the poorest school in the district rather than passing unnecessary and unenforceable policies.

This whole thing is just goofy…