The importance of educator perceptions

Last June, during Change Week at Dangerously Irrelevant, I blogged about Rogers’ diffusion of innovation theory. In that post I mentioned that one of the most underutilized aspects of Rogers’ work was the concept of perceived characteristics of innovations (PCIs). PCIs are those things considered by potential adopters that affect how likely they are to move from awareness to adoption. Rogers noted that issues of relative advantage, compatibility, complexity, trialability, and usability were important when thinking about innovation adoption. The key is that the perception – what’s inside the potential adopter’s head – is what’s important.

Rogers’ work ties in nicely with another concept that I’ve recently been thinking about: technology affordances. As Gaver (1991) noted, affordances are aspects of an object ‘that are compatible with and relevant for people’s interactions.’ In the context of digital technologies, affordances are the characteristics that let us answer the question, ‘What do these tools do for me?’ For example, the digital camera has a number of affordances that a traditional film camera does not, including easier manipulation/alteration of raw images, ease of sharing, and elimination of the need to print unwanted pictures.

The idea of affordances intersects with the idea of perceptions. Gaver has a useful diagram in his article: 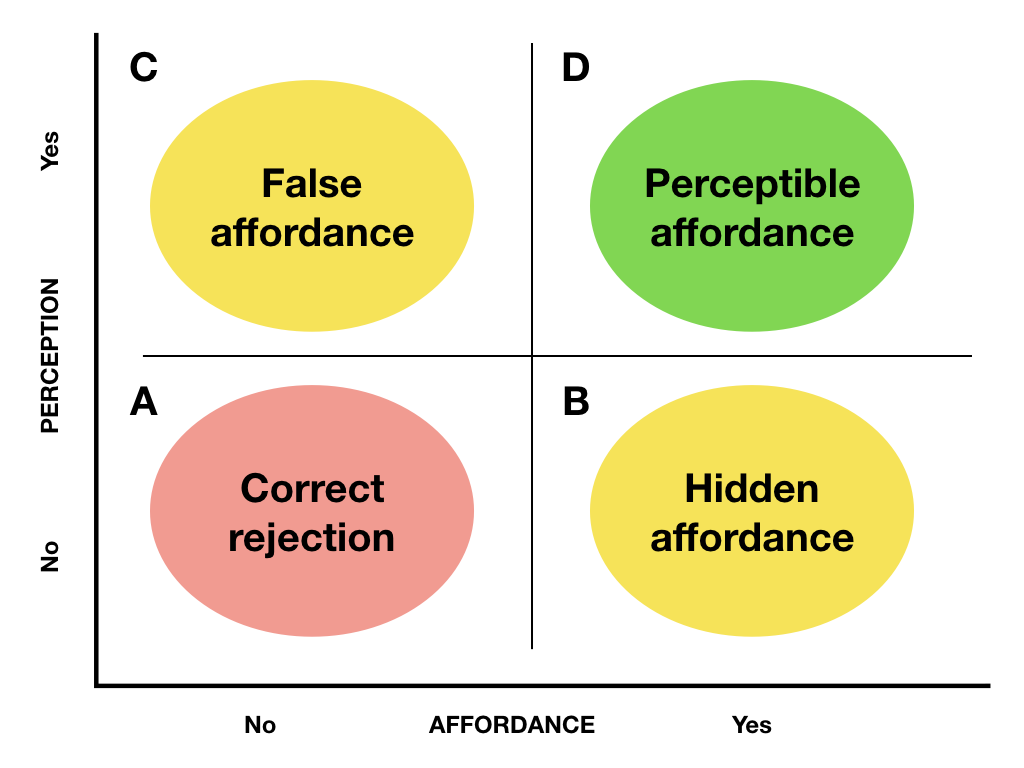 Quadrant B represents the situation when the affordance of a digital technology is actually there but is not perceived by educators. For example, essay grading software can do some powerful things but I have seen educators simply refuse to believe that the software works the way it does. In contrast, Quadrant C occurs when educators believe a digital technology might do something for them that it actually cannot (ever bought a technology that didn’t live up to its promise?). In an ideal world, educators would be in either Quadrant A or Quadrant D, rejecting or adopting digital technologies with full understanding of what those tools can or cannot do for them.

Of course we don’t live in an ideal world. In fact, it’s difficult for non-technology-savvy educators to have accurate perceptions about digital technologies’ affordances simply because their level of knowledge and understanding is so low. This leads to vendor pitch susceptibility, inappropriate buying decisions, improper implementation, incorrect rejection, and a host of other issues.

So is this all a fancy way of saying ‘don’t use technology in unthoughtful or inappropriate ways?’ Maybe. Or maybe it’s a way of saying that teachers will reside in Quadrants A or B unless we help them navigate the implementation dip that’s required to get to Quadrant D. Either way, I believe that it’s a useful framework as we think about school staff and where they fall regarding the innovations we often ask them to adopt. If we technology advocates can’t both show and persuade our potential adopters that a particular digital technology falls into Quadrant D for whatever they want to do, we’re not doing our job. And it’s not enough that the technology actually would be helpful, that it actually has the affordance. When it comes to adoption, the perception is as important as the actual capability of the tool.