Route 21 and the Partnership for 21st Century Skills

At the SETDA Leadership Summit and Education Forum, we’ve been talking a lot about 21st century skills, so I thought it might be helpful to highlight some of the work that the Partnership for 21st Century Skills has been doing.

The Partnership has been quite busy lately. In October, it announced new poll results that showed that a significant majority of voters ‘are deeply concerned that the United States is not preparing young people with the skills they need to compete in the global economy.’ Here’s an excerpt from the full report: 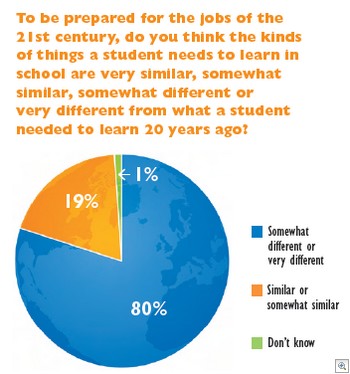 As I noted on my blog earlier this week, on Monday the Partnership, SETDA, and ISTE released a paper on maximizing the impact of digital technologies for 21st century learning. The document contains examples of successful programs that can be used as models, guiding questions for stakeholders, and action principles for moving forward. Plus there’s also this great (if depressing) quote:

No industry or organization can remain competitive today without making comprehensive use of technology as a matter of course in all of its operations. . . . [E]ducation is the least technology-intensive enterprise in a ranking of technology use among 55 U.S. industry sectors, according to the U.S. Department of Commerce.

You can read the press release, watch the 10–minute video, or dive right into the resources and tagging tools: 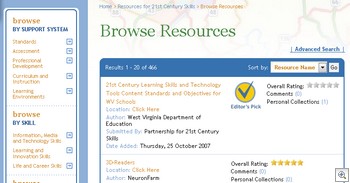 Also, for those of you who didn’t know, the Partnership recently updated its famous rainbow framework in order to better highlight essential supporting conditions: 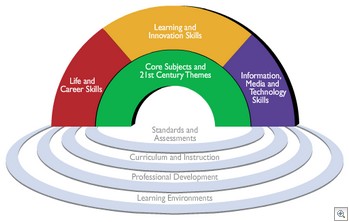 [read more about the framework]

In addition to the resources already described, the Partnership has a number of useful reports, issue briefs, and literacy maps, the latter of which are intended to give some examples of 21st century literacies in practice. Many of the Partnership’s presentations are available online, as are some nifty tools for educators and policymakers.